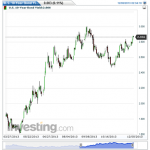 Analysts took the BoC’s headline comment (“downside risks to inflation appear to be greater”) as a sign that rate hikes will be a 2015 story.

But, for now, there is one key indicator that trumps Canadian CPI inflation, and this is it:

What you’re looking at is a chart of the U.S. benchmark bond yield. In early 2014 it will likely influence Canadian fixed mortgage rates more than any other factor (as it often does).

Economically speaking, we’re in bed with our neighbours below. Their recovery is our recovery. Despite temporary divergences, U.S. and Canadian bond yields should remain tightly correlated. (This is relevant because bond yields lead fixed mortgage rates.)

For that reason, we must keep at least one eyeball on U.S. rates, despite the fact that Canadian inflation is below target.

If U.S. yields continue uptrending, so should Canadian fixed mortgage rates. That could hold true even if the Bank of Canada kept short-term Canadian rates as-is for the time being.

Speaking of short-term rates, financial markets have been pricing in greater odds of a rate cut than a rate hike through mid-2014. While no one truly expects a cut, this probability is nonetheless positive for existing variable-rate mortgagors. 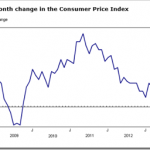 And new variable-borrowers could be happier yet. That’s because lower short-term funding costs may very well improve variable-rate discounts. The improvement would be slight, but noticeable. Just this week we saw the first prime – 0.70% rate since 2011. (It was from an online mortgage broker in B.C. and is not market-representative…yet).

So how do new borrowers plan around all of this? One sensible option for many is the 50/50 hybrid mortgage. Some call it the mortgage for people who can’t make up their mind. But it’s actually a mortgage for people wise enough not to pretend they’re smarter than the market.

The next BoC rate meeting is slated for January 22. That day will be must-watch TV because, by then, we will have:

That last point could chart the course of bond yields more than anything else.