Aging workers aren’t giving up on finding work, they’re simply retiring: RBC New study shows that the 6.9 per cent unemployment rate is likely not hiding people who have given up on finding work but indicates baby boomers 65 and older are leaving the workforce 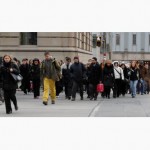 The RBC paper notes that, given soft job growth in the past year and the corresponding decline in the labour participation rate, it is easy — and likely inaccurate — to jump to the conclusion that many Canadians are becoming too discouraged to look for work.

But economist Nathan Jansen says the most likely explanation is just that the baby boomer generation is starting to retire.

The evidence for such a conclusion is there has been an increase in the number of Canadians classified as not in the workforce.

It turns out that 65 year olds and older are responsible for most of the increase in the not-in-the workforce category — not because they are discouraged but because they have retired, says Jansen.

He points out that back in 2007 Statistics Canada predicted that the participation rate would start to fall sharply going forward because of the aging population, with the decline becoming noticeable in 2011.

If the analysis is true, that is good news for policy-makers because it suggests the country’s current unemployment rate of 6.9 per cent reflects accurately what is going on in the labour force and does not hide a large number of discouraged workers.

But analysts have also warned that as baby boomers retire it will squeeze government budgets with higher costs for services such as health care and fewer workers paying taxes.