OTTAWA • The Bank of Canada should keep its key interest rate on hold until economic data persuades it otherwise, central bank chief Stephen Poloz said on Tuesday, adding that he was not worried about calls from 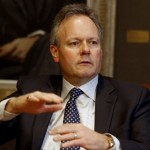 “For us, minimizing the risks of making a big mistake here is what we’re trying to do, and that tells us that we should be holding rates where they are until the data flow changes our mind,” Poloz said in an interview with CBC television.

Andrew Coyne: It is not only the Bank’s independence, real or perceived, at stake. It is its policy legacy, and the resulting expectations of market participants

His comments follow controversial remarks by Canada’s finance minister on Sunday suggesting there would be pressure to raise interest rates in 2014.

“For us, minimizing the risks of making a big mistake here is what we’re trying to do, and that tells us that we should be holding rates where they are until the data flow changes our mind,” Poloz said in an interview with CBC television.

Asked about the potential for higher rates in 2014, Finance Minister Jim Flaherty told CTV television on Sunday there would be some pressure to tighten because of the U.S. Federal Reserve scaling back its bond-purchasing program.

He also cited reports by the Organization for Economic Co-operation and Development and the International Monetary Fund recommending rate increases.

“I think the pressure will be there because the Fed in the U.S. should stop printing money, and taper off as they say … And the OECD and the IMF have both said to Canada, we ought to let our interest rates go up a bit, so there will be some pressure there for that to happen,” Flaherty said.

Flaherty’s remarks spurred some criticism that he appeared to be meddling in the day-to-day implementation of monetary policy, which is the domain of the Bank of Canada and supposed to be off limits to the government.

His comments on the outlook also appeared to contradict the central bank chief, who has been signaling rates are on hold for the foreseeable future.

Poloz, who took the helm at the central bank in June, oversaw a sharp policy shift in October when he abandoned any talk of rate hikes after 18 months of signaling that a tightening of policy was on the horizon, pointing to inflation that has been below the bank’s 2% target for a year and a half.

Analysts in a Reuters poll have forecast the Bank of Canada will begin raising its main policy rate in the second quarter of 2015.

The CBC cited Poloz as saying he was not worried by international calls for rate hikes and that his decisions would be based on Canadian economic factors. In November, he disagreed with the OECD’s assessment that rate hikes could start in 2014.

Poloz did say on Tuesday there would be upward pressure on rates this year, but he referred specifically to long-term market rates, not the rate set by the central bank, as the U.S. and global economies strengthen and stimulus is curbed.

“So as a tapering occurs we might expect to see, as we saw in the summer, some increases in long-term rates, (although) most of it seems to be priced in,” Poloz said.

Adjusting the central bank’s target for the overnight rate, on the other hand, is a tool that is available “but we have to consider in the broader context what impact would it have,” he said.

Higher rates would have a negative impact on highly indebted Canadian consumers, he suggested.

“Would it be the same size impact we normally would expect? Probably not, given the situation,” he said, referring to the record high household debt-to-income ratio and a situation that he called “fragile from a consumer point of view.”