OTTAWA — There has been a sea change at the Bank of Canada. 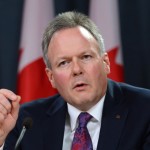 No longer are policymakers setting a specific monetary course for interest rates. Instead, for the first time in 18 months, they have dropped any reference to borrowing costs eventually rising — adopting a neutral position and waiting to see which way economic winds blow.

What hasn’t changed, however, is the central bank’s biggest policy lever — its benchmark lending rate, which has remained at a near-record low of 1% since September 2010 and which has been locked in by lower-for-longer inflation and weaker-than-forecast growth.

Those policymakers — now under the leadership of Stephen Poloz, who replaced Mark Carney in June — on Wednesday kept their key rate as is, and where it will likely remain until mid- or late 2015.

They also downgraded growth estimates for Canada, despite some positive economic signs coming out of Europe and Asia, tempered by ongoing uncertainty over budget crises in the United States.

Any rate change will be “very clearly later than we thought,” Mr. Poloz, 58, told reporters in Ottawa.

But the bank governor would not comment on what direction — up or down — rates will eventually take. Instead, Mr. Poloz said the process of balancing future data will be not a matter of “engineering” but “ risk-management.”