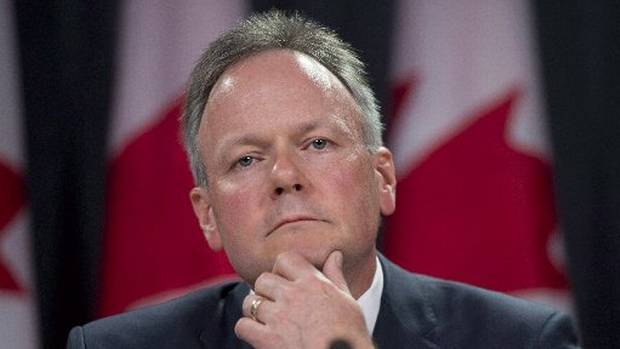 The Bank of Canada is warning that unusually low inflation pressures will persist into 2016 – a new forecast that could further delay future interest rate hikes and send the Canadian dollar lower.

The currency plunged after the announcement, sinking to 90.3 cents U.S. by late morning.

The central bank kept its key overnight interest rate unchanged at 1 per cent Wednesday, or where it’s been since September 2010.

But the clear signal from bank governor Stephen Poloz is that disinflation is his paramount concern, and it isn’t fading any time soon.

“Inflation is expected to remain well below target for some time, and therefore the downside risks to inflation have grown in importance,” the central bank said in a statement.

Bank of Montreal chief economist Douglas Porter said Mr. Poloz is getting what he wants – a lower dollar – without actually cutting rates to get it.

“Suffice it to say that the bank is welcoming the weakening Canadian dollar with open arms,” Mr. Porter said.

The statement also makes clear that the bank’s next move, up or down, will be dictated by “how new information influences the balance of risks.”

“The bank is now saying it no longer has much conviction with respect to the direction of the next rate move,” Bank of Nova Scotia economists Derek Holt and Dov Zigler said in a research note.

The bank blamed “widespread and persistent competition among retailers, along with “significant” slack in the economy. The bank put a figure on the so-called “Target effect” of intense price competition – 0.3 percentage-points off core consumer prices in 2014 – as retailers fight for market share in a much more crowded industry.

Among the pressures is aggressive price-cutting by major chains such as Wal-Mart, Sobeys and newly arrived U.S. retailers such as Target Corp.

The bank pointed out that disinflation is not a uniquely Canadian phenomenon. It’s part of a pattern now entrenched in most advanced economies. Among the causes: lower prices for many food items and lingering effects of the deep global recession of 2008-09.

The Bank of Canada now expects inflation – running at a rate of less than 1 per cent annually in the fourth quarter – will not reach its 2 per cent target until 2016, according to its first monetary policy report of the year. In October, the bank had forecast that inflation would reach its target near the end of 2015.

“The path for inflation is now expected to be lower than previously anticipated for most of the projection period,” according to the statement.

The bank’s tone suggests an eventual return to higher rates may be delayed, yet again. Several Canadian banks this week lowered their own rates on mortgages and other loans.

The bank’s inflation angst could help push the Canadian dollar even lower. The loonie has already lost roughly 10 per cent in the past year and is now trading near 91 cents (U.S.).

A lower dollar is generally good for exporters and local tourist operators, but it increases the cost anything Canadians buy outside the country.

In spite of the “dovish” tone of the statement, the bank gave no hint that it’s actually prepared to lower its key interest rate. That might stoke inflation, but it would also encourage already heavily indebted Canadians to borrow even more. The central bank left its so-called rate-bias in neutral Wednesday, implying that its next move is just as likely to be a rate cut as a rate hike.

And yet not one of the 37 economists polled by Reuters last week expects the Bank of Canada to cut rates this year and next. All are forecasting the bank’s next move will be a rate increase, with the median forecast of a quarter-percentage-point increase in mid-2015.

The bank lowered its forecast for inflation over the next two years. In 2014, for example, the bank expects CPI to range from a 0.9 per cent annual rate in the first three months to 1.5 per cent in the fourth quarter. These forecasts are 0.2 to 0.3 percentage-points lower than its October estimates.

Mr. Poloz has repeatedly predicted that Canada’s export sector will eventually take over from consumer spending and the hot housing market.

In its statement, the bank said this “anticipated rebalancing” remains elusive. But it said stronger U.S. demand and the lower Canadian dollar should drive growth in Canada in 2014 and beyond.

As a result, the bank has increased its projections for exports in 2014 and 2015, along with its estimates for GDP growth. The Bank of Canada now expects the economy to grow at annual rates, ranging from 2.3 per cent in the final three months of 2013 to 2.5 per cent in the second quarter of this year and beyond.

“Stronger U.S. demand, as well as the recent depreciation of the Canadian dollar, should help to boost exports and, in turn business confidence and investment,” the bank said in a statement.