BARRIE MCKENNA AND BRENT JANG-  OTTAWA/VANCOUVER — The Globe and Mail 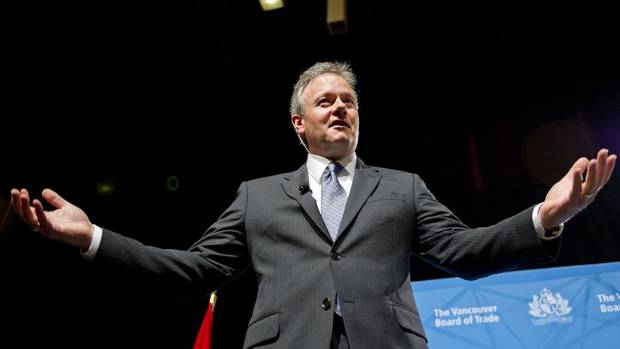 Bank of Canada Governor Stephen Poloz speaks Wednesday, Sept. 18, 2013, in Vancouver. Mr. Poloz told the Vancouver Board of Trade he is not concerned about a potential housing bubble.
(JIMMY JEONG/THE CANADIAN PRESS)

Bank of Canada Governor Stephen Poloz is painting a brighter picture for the Canadian economy while tossing aside concerns over a housing bubble.

“We are now close to the tipping point from improving confidence into expanding capacity,” Mr. Poloz told more than 600 members of the Vancouver Board of Trade in his second public speech since taking over from Mark Carney in June.

Mr. Poloz said the key pieces of a more normal and self-sustaining economy are falling into place.

Most economists don’t expect the Bank of Canada to start raising its key overnight rate – which has held at 1 per cent since September, 2010 – until late 2014 or even 2015.

Mr. Poloz said the central bank will eventually raise its key interest rate as inflation moves back up to the bank’s annual 2-per-cent target. “We can expect that short-term interest rates, as is normal, will be above inflation,” he said.

His only hint on the timing of eventual higher rates came when he said the economy can support much stronger activity “without stoking inflation,” given the slack in the labour market. That suggests the central bank could be on hold for some time.

At a news conference, he said major real estate markets across Canada appear healthy 14 months after Ottawa tightened mortgage borrowing rules in July of 2012. “Our reading of that is that markets have responded to the various changes in the rules around mortgage underwriting in a way which has in effect engineered a soft landing – a much more comfortable kind of situation,” Mr. Poloz said.

Even though mortgage rates have crept up recently, interest rates remain at historically low levels. “If you’re in a position to buy a home, of course chances are that you will. So, what I have been suggesting, though, is that people take care to do the arithmetic,” he said.

Consumers have been mindful of their exposure to potentially higher mortgage payments when it comes time to renew in three to five years, Mr. Poloz said. “I don’t know what those numbers will be, but you want to make sure that you test it a little bit and you know that you’ll be able to be afford the payments at those higher levels,” he added.

Mr. Poloz said Canadians have been taking on more debt amid the climate of low interest rates since the 2008-09 recession, but he forecasts that consumers’ income will grow at a faster rate than their debt over the long term. “I don’t perceive that there is a bubble in Canada’s housing market,” he said.

During his speech, he said he is optimistic that gathering foreign demand – particularly from the United States – will soon boost business confidence and prompt companies to expand and invest.

He pointed out, for example, that an unusual post-recession dearth of new company formations appears to be ending. After four years of stagnation, 40,000 new companies with at least one employee were created in the past 12 months in Canada, helping to replace the ones destroyed in the recession, he said.

Mr. Poloz also talked about the “tapering” process in which the U.S. Federal Reserve will, at some point, ease the pace at which additional stimulus is provided to the American economy. It decided against such a move Wednesday.

He likened the financial crisis to “a pot of simmering spaghetti sauce,” where injections of easy money in the economy have created a bubble, but also a large crater. “Central banks have been filling that crater with liquidity,” he said. “Central banks can gradually reduce the rate at which they add liquidity. That’s not policy tightening. Rather, it’s another welcome sign that things are getting back to natural growth. And it indicates that the underlying momentum of the U.S. economy is expected to hold.”