Buyers looking to ‘downgrade their homes and upgrade their lifestyle’. 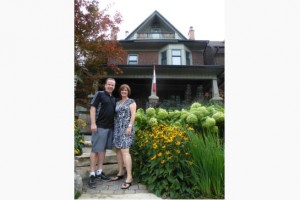 SUSAN PIGG/TORONTO STAR
Andy Macaulay and Anne Sutherland are getting ready to put their Riverdale home on sale.

It took baby boomers Anne Sutherland and Andy Macaulay many frustrating years of “trying to tick off all the boxes” until they finally found a place they could call home among Toronto’s towering condos.

Come November, the couple will downsize from their 2,500-square-foot Riverdale house to an $800,000 condo that you might say was almost custom-made for boomers in a city exploding with shoeboxes in the sky.

It’s a 1,271-square-foot unit, spread over two levels, in one of the most coveted downtown neighbourhoods in the city, the St. Lawrence Market area.

The Berczy doesn’t have a basketball court or a costly swimming pool. The concierge desk is only manned eight hours a day because that’s more affordable for owners.

And almost all the units in this 12-storey boutique building have been bought by folks who actually plan to live there, rather than investors looking to rent them out.

That’s because Vancouver-based Concert Real Estate Corp. carefully targeted sales to buyers in their 30s to 60s who were willing to pay the price for bigger units and a community of committed condo owners, rather than to transient renters.

“It ticked off all the boxes” and felt the most like a house of any condo the couple saw, says Sutherland, who spent three years touring church conversions, visiting new condo sales centres and scouring MLS for older condos that afforded a bit of privacy and would allow anything bigger than “a snack dog.”

The couple — and their beloved golden retriever, Finn — quickly discovered what’s coming as a huge shock to many baby boomers now looking to “downgrade their homes and upgrade their lifestyle,” in the words of one realtor.

The giant demographic group has been largely locked out of Toronto’s condo boom.

“We were really surprised by the lack of options,” says Sutherland. “When you are used to living in a house, and you are able to work from home, you want to have doors that close and some level of privacy.”

Condo realtor Roy Bhandari has been hearing those same complaints a lot lately in the face of what he says has been a recent surge of boomers looking to move from the suburbs to the city.

“They’re telling us that living in a 4,000-square-foot home is not a lot of fun — that it feels more empty, the larger it is, now that the kids are gone.

“They’ve seen how much the city has grown and most of them want to be close to the water or central enough that they can walk everywhere.”

Those largely highrise units may work for boomers looking for what Bhandari calls “urban cottages”. A contingent of boomers plans to keep their big homes, cottages or farmhouses as family gathering places and are just looking for small suites where they can spend weekends, close to great restaurants and theatres.

But the other group of boomers Bhandari is now seeing are proving to be the much bigger challenge. They’re looking to trade their oversized houses in Orangeville or Oakville for units of 1,500 square feet or more.

They are shocked to discover how little is out there and that they will have to pay almost as much as they hope to get for their houses, but for half the space or less.

Most get over the initial sticker shock for a chance to be close to the action, says Bhandari.

This is a crowd that’s not keen to wait three to five years for their condo to be built. They want it to be move-in-ready within 18 months — the time they need to pack up decades of memories, pawn off furniture on friends and family and get their heads around one of the biggest moves of their lives.

Sutherland and Macaulay are a bit of an exception.

They bought from blueprints three years ago, but largely because they loved the bigger units in The Berczy.

“The word ‘freedom’ was at the top of our list,” says Macaulay, an advertising executive and, like his wife, a strategic planner. “We love to travel and we’re looking forward to just being able to lock the door and go.”

Even Concert’s director of project sales, Catherine Diraison, acknowledges it’s really tough for developers to cater to the boomer market in Toronto, given land prices that have skyrocketed the last few years.

Concert has one important advantage with its first two projects here, The Berczy and now 88 Scott. Its projects are backed by major pension funds rather than banks, which require that 70 per cent of units be sold before developers can get financing to start construction.

By targeting investors rather than so-called end users, developers can get to the 70 per cent threshold much quicker and get projects underway. But that means many projects, especially close to transit and downtown amenities, can be anywhere from 30 to 90 per cent investor-owned, with smaller units aimed specifically at renters, making them more apartment buildings than condo communities.

Like most boomers, Sutherland and Macaulay were looking for a smaller building with the sense of community they’ve grown used to in a house.

This week, the couple put their three-storey Logan Ave. home on the market for $1.5 million. Sutherland insisted on going away so she didn’t have to watch the stagers remake the gracious old home where she and Macaulay raised their son over two decades.

Sutherland’s excited about the future, except for the notion of being dependant on an elevator for the first time since her 20s.

And just one thing keeps Macaulay up at night: Wondering what the view of the downtown will look like the first time they walk into their new home.

Just when you thought Toronto condos couldn’t get any smaller, developers Urban Capital and Malibu have announced what they are touting as Toronto’s first “micro condos.”

The 300-square-feet-and-up, fully furnished suites are planned for a new 25-storey building, Smart House, at the corner of Queen St. W. and University Ave. They are slated to start at $249,000 and will go on sale in October.

Furniture in the 241 suites will do space-saving double duty: Beds, for instance, will fold into the wall and convert in a sofa.

But the project has a long way to rival the real micro-condos of the world, such as those in Tokyo, where folks live in “capsules” as tiny as 96 square feet.