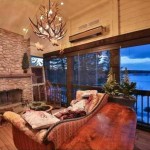 Sotheby’s International RealtyThe estate, once owned by the Ford family of Henry Ford heritage, listed for $37.9-million, with views of the Rocky Mountains, comes with four fireplaces, $1 million in mouldings and two garages for six cars.

“This is the big reward,” Lindholm, 52, said from the new home he shares with wife, Kristi, 35, and their four kids. “Calgary’s a neat city to be part of, the opportunities are here right now. It’s amazing how it’s grown, with all the development taking place in the oil and gas sectors.”

The energy patch in Calgary, nicknamed “Cowtown” for its annual rodeo, and low mortgage rates are transforming Canada’s fourth largest city into a hub of luxury housing. Neighborhoods named Tuxedo Park and Hamptons are expanding as energy industry executives from Canada, the U.S. and Europe fuel record sales of Calgary’s most expensive homes.

TIRION PROPERTIES LTD. Neighborhoods named Tuxedo Park and Hamptons are expanding as energy industry executives from Canada, the U.S. and Europe fuel record sales of Calgary’s most expensive homes. Lindholm’s 14,500 square-foot (1,347 square-metre) estate, which features an eight-foot Swarovski crystal chandelier, broke the record for the most expensive home sold in Calgary when he bought it last year. That mark was topped by a $11.1 million sale later that year, which in turn may be shattered by a current listing of a $37.9 million home once owned by Henry Ford’s family.

“Luxury demand is growing,” said Corinne Poffenroth, an agent for New York-based auctioneer Sotheby’s, who represented the Lindholms in their home purchase. “Our energy sector is very strong and it attracts top-ranking executives across the country and the world. There’s a lot of young new money.”

While Vancouver and Toronto, Canada’s financial capital, boast the country’s most expensive housing, sales of luxury homes in Calgary are surging. Realtors in the city, known for sprawling suburbs and the tallest office tower in western Canada, sold 404 homes priced above $1 million in the year to June 13. That’s an all-time high for Calgary and more than 10 times the total for an entire year a decade ago, according to Calgary Real Estate Board data.

The jump in sales has been powered by oil, the most important commodity in the western province. Investment in Alberta’s oil sands may reach a peak this year of more than $30 billion, according to investment bank Peters & Co. That’s generating high-paying jobs in Calgary, Alberta’s biggest city, whose population expanded to 1.2 million last year.

Calgary has the highest concentration of millionaires in any of Canada’s major cities, according to Calgary Economic Development, a nonprofit group. Some of the city’s wealthiest residents and foreign buyers flock to tours of highly priced homes by helicopter. Sotheby’s International Realty Canada added a private helicopter service for its real estate clientele in Calgary in June, a first for the firm in Canada.

“It’s a boom-bust economy that lives and dies by oil prices, and the housing market is the same,” said Robert Kavcic, Bank of Montreal senior economist in Toronto. “If you were to say what’s going to drive luxury real estate in Calgary, I’d say just oil prices.”

West Texas Intermediate, the U.S. benchmark crude, has averaged more than US$90 a barrel over the past five years, the longest stretch at that price. That stability is unusual for a volatile commodity whose price sank to US$33.87 a barrel in December 2009 from a record of almost US$150 six months earlier.

Low mortgage rates have also helped drive housing sales. Posted rates for a five-year loan have been at a record low of 4.79% since April 9. And some lenders are offering three- year variable-rate mortgages for as low as 1.99%.

Sotheby’s International RealtyThe former estate of Henry Ford’s family is guarded by a security gate and surrounded by 242-acres of pastures and several lakes in Millarville, a 45-minute drive south of Calgary. Millionaire Mortgages

Millionaires are taking home loans because a lot of their assets are tied up in investments they don’t want to liquidate, said Martin Reid, president of Home Capital Group Inc., Canada’s largest alternative mortgage provider. Lenders often offer smaller loans for luxury homes because the prices are susceptible to big fluctuations. Reid said about 5% of the homes for which his company provides mortgages across Canada are priced above $1 million.

Calgary, which sprang up in 1875 as a fort town for the North-West Mounted Police along the banks of the Bow and Elbow rivers, now has at least four neighborhoods where the average house price is $1 million or higher, according to the city’s real estate board.

Those communities include older areas like Mount Royal. It was developed by the Canadian Pacific Railway, which owned most of the land in Calgary in the early 20th century. Bel Aire, one of the established million-dollar areas, has a view over the city’s largest reservoir and is bordered by its oldest private golf course.

The former estate of Henry Ford, the founder of Ford Motor Co., is now listed for $37.9 million, the highest in the province. The 5,000-square-foot home is guarded by a security gate and surrounded by 242-acres (98-hectare) of pastures and several lakes in Millarville, a 45-minute drive south of Calgary. The home, with views of the Rocky Mountains, comes with four fireplaces, $1 million in mouldings and two garages for six cars.

Corea’s typical client is a professional in the oil and gas sector between the ages of 35 and 50 who wants expensive amenities including top-tier appliances and granite countertops.

Corea said the city’s housing could begin to lose its glow as supply catches up to demand.

Homes listed at more than $500,000 jumped 42% to 1,359 units in June over the same time last year, according to the city’s real estate board. Single detached homes will be constructed this year at the highest pace since 2007, according to forecasts by Canada Mortgage and Housing Corp.

“As this market has moved into more balanced conditions, and if inventories continue to rise, price growth should ease throughout the remainder of the year,” said the board’s chief economist Ann-Marie Lurie.

Lindholm, the oil entrepreneur who drives a red Ferrari, said his father gave him a warning after he bought his castle-like home.

“My dad says, ’Nice house. You’re never going to be able to sell that’,” said Lindholm, who moved his family from a home in the city that they sold for $2 million. “I think he’s right. Maybe not now because there’s a small market for this size house — but it’s growing.”