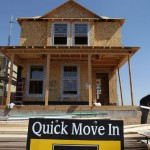 OTTAWA — Statistics Canada says municipalities issued building permits worth $6.9 billion in May, up 13.8% from April.

The agency says the increase in May resulted primarily from higher construction intentions for commercial buildings in Ontario and Manitoba, as well as multi-family dwellings in British Columbia.

It says the total value of permits has been on a slight upward trend since the beginning of 2014.

Gains were posted in every province in May, except Quebec and Nova Scotia, with the largest increases recorded in Ontario, British Columbia and Manitoba.

Construction intentions for residential dwellings rose 9.5% to $4.1 billion in May, the third consecutive monthly increase.