Canadian existing home sales fell for a fifth month in January on fewer transactions in Toronto and Vancouver, adding to evidence the nation’s housing market is cooling. 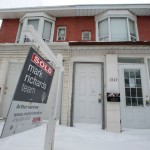 CREA, based in Ottawa, cited cold weather for the drop in sales last month.

The number of homes sold in Toronto fell 4.2% in January from a month earlier, while the number of transactions in Vancouver were down 3.9%, the group said.