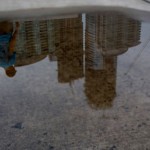 OTTAWA — A sudden and sharp correction in the housing market could have a devastating impact on the Canadian economy overall, enough to trigger another recession, says a new Bank of Montreal report.

Bank of Canada holds rate at 1%, cuts growth forecast for 2014

The Bank of Canada says it is keeping interest rates at historically low levels for the foreseeable future while shaving its previously posted expectation for the economy’s performance in the first quarter and 2014 as a whole.Keep reading.

The analysis by senior economist Sal Guatieri finds that even a 10% correction — what many would call a soft landing — could sap as much as one percentage point from gross domestic product growth, or basically halve the current growth rate.

The findings stems from an analysis on the contribution of the brisk housing market on the Canadian economy between 2002 and 2007, when prices rose five percentage points faster than incomes.

According to the BMO, the rapid escalation in home prices and construction added 0.56 percentage points to annual growth during those six years, and “lifted household wealth, confidence and borrowing ability.”

But now, with home values at or near record levels throughout the country and many economists predicting some kind of correction, the opposite scenario would unfold from a price and accompanying construction drop.

“This suggests a moderate correction could have a meaningful slowing effect,” Guatieri says in a report issued Friday.

Guatieri adds that given the record levels of household debt accumulated by families, the negative impact of a correction could even be worse than the bank’s models project.

On Wednesday, Bank of Canada governor Stephen Poloz said while a housing correction remains a risk to the economy, the most likely outcome was for a “soft landing.”

The central bank took comfort in the fact price increases had moderated and that household debt levels had stabilized — while remaining elevated — at 164% of disposable income.

The BMO report does not suggest a major correction is in the offing, as some economists have predicted. In fact, it argues the opposite. Guatieri says the so-called “bubble” in housing is exaggerated and that Canada is not in the same position the U.S. found itself prior to the 2007 crash.

He notes that while the run-up in housing prior to the recent recession may have been similar in both countries, the boom was smaller in Canada and had been preceded by years of below average homebuilding, so was in part a response to pent-up demand. That was not the case south of the border.

He also points out that with the exception of Toronto, Calgary and a few other hotbeds, Canada’s housing boom essentially ended in 2008. Since then, price increases have risen only moderately more than incomes.

Still, Guatieri’s findings agree with the central bank’s contention that housing remains a key vulnerability to the economy as a whole.

“This speaks to the need for households to manage their debt prudently,” he said.