TORONTO — Canadian housing starts cooled more than expected in August, while the previous month was also revised slightly lower, data showed on Tuesday, setting the stage for what is widely expect 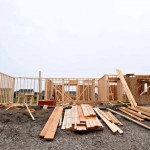 ed to be a slowing housing market as 2014 draws to a close.

A report from the Canada Mortgage and Housing Corp showed the seasonally adjusted annualized rate of housing starts slipped to 192,368 last month from a downwardly revised 199,813 units in July.

Related CMHC could force banks to pay deductibles on mortgage insurance Canada building permits soar to record on Toronto, Vancouver condos Thinking about a move-up buy? Forget it, new study says you can’t afford it The small drop brought the six-month moving average to 189,837, little changed in the last 12 months despite a big slowdown in the harsh winter months and a roaring bounce-back in the spring and early summer.

“The persistence of unsustainably lean mortgage rates has likely bolstered housing demand in recent months, and even with the dip in August, starts remain elevated relative to the rate of household formation,” Laura Cooper, an economist at Royal Bank of Canada, said in a research note.

Canada’s housing market has defied expectations for a slowdown or crash but most economists expect homebuilding and sales to slow when mortgage rates rise. Mortgage rates remain low and borrowers are taking on near record levels of household debt to get into the market.

“The Bank of Canada may be looking for a rotation away from housing and the consumer, but low rates continue to support residential investment,” CIBC World Markets economist Nick Exarhos said in a research note.

“But despite recent resiliency, we still expect housing’s contribution to growth to slowly wane as we progress through this business cycle, with affordability concerns and a weak labor market putting pressure on the building sector going forward.”

The drop was nearly across the board, as single-unit starts fell 3.3% and multiple units, typically condominiums, dipped 4.0%. Both rural and urban starts declined.

July’s softness was led by a big drop in starts in Ontario and the Atlantic, with a smaller decline in Quebec. Starts rose sharply in the Prairie provinces and in British Columbia.

Despite the small drop in August, economists are penciling in a strong year for home building in 2014.

“On account of the robust readings for housing starts so far this year, we have revised our forecast up to 188,000 units for 2014, a pace matching that of 2013, before underlying conditions shift and slow activity to 177,000 next year, with a similar moderating trend anticipated in the resale market,” Cooper said.