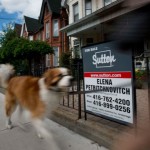 OTTAWA — After consistently bucking predictions that a slowing trend was just around the corner, Canada’s housing market is now showing signs that it is, indeed, headed for a soft landing.

Pockets of risk in Canada’s condo market but don’t expect a crash, Conference Board report says

Pockets of risk continue to exist in the condominium markets of Toronto and Vancouver, but a broad-based downturn is unlikely, according to the latest Conference Board of Canada condo report commissioned by Genworth Canada

Both prices and construction are still rising, but the pace of construction is expected to taper off over the next two years as homebuyers increasingly turn their attention to excess supply in the market.

Housing starts should total between 179,600 and 189,900 units this year, and possibly increase by as much as 203,200 units in 2015 before building activity begins to ease, according to Canada Mortgage and Housing Corp.

“However, our latest forecast calls for starts to edge lower as builders are expected to reduce inventories instead of focusing on new construction.”

Wednesday’s housing outlook for 2014-15 follows a CMHC report earlier this week that showed only a modest increase in housing starts between June and July, with the agency saying it “continues to expect a soft landing for the new home construction market in Canada.”

The Teranet-National Bank price index rose 4.9% in July from the same month a year earlier, compared to a 4.4% annual rise in June, according to the index, which tracks repeat sales of single-family homes.

On a month-over-month basis, the index increased 1.1% from June.

Benjamin Reitzes, senior economist at BMO Capital Markets, said a soft landing is unlikely to really take hold until interest rates start rising, which many analysts expect will be in mid-2015.

“When that happens, then you’re going to see the housing market roll over a bit and things slow down on the pricing front, on the sales front and on the construction front,” he said.

“But there’s nothing to make us believe that a crash or any kind of significant correction is coming broadly to the market.”

Unlike in the United States, Canada’s housing market has so far avoided a correction. In fact, the housing sector in this country has shown surprising resilience — even as the overall economy struggles to maintain growth.

But given record-low mortgage rates in this country, there have been concerns about the amount of debt that homebuyers are taking on — prompting the federal government to progressively tighten lending rules since the 2008-09 recession.

“We know that part of the reason for this is low interest rates,” he told reporters ahead of a two-day meeting with private-sector economists and business leaders in Wakefield, Quebec. “We’re monitoring the market carefully but [we] are not alarmed by what we see.”