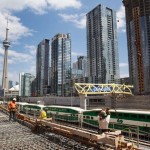 The pace of work on new homes rose 6.5 per cent to 195,620 units at a seasonally adjusted annual pace in November, Ottawa-based Canada Mortgage & Housing Corp. said Monday. Multiple-unit starts in urban areas rose 13.6 per cent to 112,583, reversing most of the prior month’s decline, and single-family starts fell 2.9 per cent to 63,760 units.

Gains in the housing market this year have been supported by low mortgage rates and falling unemployment. The Bank of Canada has said there are signs of “imbalances” in consumer finances that will moderate, and that the country will avoid a housing crash. Starts next year will slow to a pace of 185,000 units, says Toronto-Dominion Bank economist Diana Petramala.

“While interest rates are expected to remain low in 2015, the housing market will face a number of headwinds,” including higher prices and lower oil that will crimp demand in cities linked to energy production, she wrote in a research note.

Another report Monday from Statistics Canada showed that building permits rose 0.7 per cent in October as gains for industrial projects were curbed by a drop in residential work.

Residential permits fell 0.4 per cent to $4.46 billion as single-family homes were unchanged at C$2.42 billion and multiple-unit projects such as apartments and condominiums fell 0.9 per cent to $2.04 billion.

Industrial projects such as buildings for utilities and manufacturers jumped 34.4 percent to $614 million, leading a 2.4 percent rise in permits for non-residential construction to $3.07 billion.

The pace of housing starts for November almost matched economist forecasts for 195,000, the median of 14 responses to a Bloomberg News survey.