The housing boom has not only resulted in record real estate prices, it has spawned an unprecedented number of realtors. 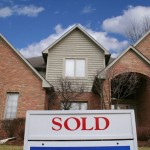 The number of people selling real estate reached 108,706 during the first quarter of the year, according to the Canadian Real Estate Association. To put it another way, that’s one realtor for every 245 Canadians over the age of 19.

Toronto is on the verge of becoming the second Canadian city where the average price of a detached home hits the $1-million mark. <em>Keep reading.

No where is the bubble in agents more apparent than Toronto, perhaps the hottest market in the country for property. The Toronto Real Estate Board wouldn’t provide an exact number for its members but TREB’s boiler plate statement this month said it had reached more than 39,000 — or about one for every 140 people in the Greater Toronto Area.

We have almost as many people selling houses as making them. Statistics Canada said in its labour force survey for the year 2013, there were 131,000 carpenters. There are only 202,200 cooks in Canada.

So what’s going on? Much of it is an influx of speculative careers from would-be real estate agents who see a quick buck to be made because they know someone selling their house and they want to get the listing and the fat commission — up to 5% of the house price — that comes with it.

There is no data on commission rates but the general rule in Ontario is 5% of the sale price is split by two realtors on a deal while other provinces have a sliding scale where the percentage increases at higher amounts.

Toronto prices are soaring, especially single family homes. TREB reported this past week that average single detached home in Toronto sold for $965,670 last month, a 13.2% increase from a year ago. At $1-million, there’s $50,000 to be split by realtors.

“The single biggest reason for the allure of the market is the strength of the market,” says Mr. Dale, who himself has just jumped on board as president of a new entity called Zolo Realty which provides leads to realtors.

The rules on who can sell real estate are different from province to province. In the country’s largest market, the Ontario Real Estate Association operates the training but the Real Estate Council of Ontario regulates.

OREA says the average student takes about 11 months to complete the course although they have up to 18 months after they start. Once registered with RECO, students have two years to complete the articling segment of the training program with a broker. The total program costs about $3,180 but that just makes you a salesperson and not a broker.

“We see a very diverse mix in our classes. They’re made of a combination of high school graduates, folks at university doing it on the side, retirees and a diverse mix in terms of cultural background,” says Shelley Koral, director of the OREA College.

Tim Fraser for National PostPhil Soper, chief executive of one the largest real estate companies in the country, Royal LePage Real Estate Services Inc., says there has been a rise in what he calls “the speculative” agent.

But Phil Soper, chief executive of one the largest real estate companies in the country, Royal LePage Real Estate Services Inc., says there has been a rise in what he calls “the speculative” agent.

“This is a real regional story. If you look at Quebec, where they took a different approach to licensing and professionalism by increasing the length of time and difficulty to get your licence, their ranks have shrunk,” says Mr. Soper, who said at his parent corporation’s annual general meeting this month he wasn’t interested in adding agents just doing one-off deals.

Changes dictated by the Competition Bureau have made it easier to access the Multiple Listing Service where about 90% of transactions take place. Some boards have been flooded with people ready to offer discount deals because they have access to that information.

“You’ve got speculative agents who get their licence on the chance they might be able to sell a home,” says Mr. Soper.

You still have to work under the licence of a brokerage in Ontario but he says “licence warehouses” have been created in the industry where sales people doing a deal or two can quickly join.

“They are really only brokerages in name only,” says Mr. Soper. “They have hundreds or thousands of people, there is no training, there is no management.”

Doug Porter, chief economist with Bank of Montreal, says the rise in realtors, doesn’t surprise him considering the strength of the housing market.

“There’s the pull that home sales have been strong and prices on a tear. The push has been the underlying job market has improved but it’s weaker than when the recession began,” he said.

The benefit of all these realtors jumping into the market is negligible, when it comes to adding to gross domestic product. “It adds only modestly,” said Mr. Porter.