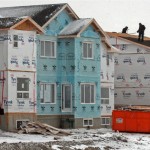 Prices are on track to fall as much as 10% in Calgary, Edmonton and St. John’s Newfoundland over 2015 and into 2016 as the collapsing oil industry hits growth, incomes and employment.

“A significant softening in job markets will set the stage for a second major housing correction in Calgary and Edmonton since 2008,” TD economists Derek Burleton and Diana Petramala write in their report Thursday.

Oversupply will further pull down prices. Listings have spiked in Calgary and Edmonton and record home building (up 50%) in those two cities last year will put more pressure on prices.

TD expects Alberta will narrowly avoid a recession, but the hit to incomes and rising unemployment will make it feel like one. The outlook for Newfoundland is much worse, with the province headed for recession this year.

TD Economics Unlike the west, Newfoundland’s housing market was already in trouble, with prices down 35% from the 2012 peak. The oil shock will extend what is now a three-year housing downturn.

While the oil capitals battle these headwinds, other parts of the country are expected to hold up well, despite repeated calls for a national housing crash over past years.

Housing markets in British Columbia are expected to be the best performers in 2015. A mild correction in 2011 and 2012 slowed home construction and the resale market has rebounded. TD says the market will be driven this year by solid economic growth, an influx of people from Alberta and the continued confidence of foreign investors.

Thornton taking Barrick Back to the Future