TORONTO — A Bank of Montreal report on first-time home buyers says the average budget has increased to $316,100. 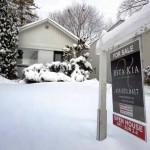 The BMO study says a sample of prospective buyers in Vancouver, Toronto and Calgary had even higher budgets for their first home.

About one-third (30%) of the 513 Canadians interviewed online for the study said they expected assistance from parents or family.

Nearly two-thirds (61%) said they have made cuts to their lifestyle to save for their first home.

Pollara conducted the online interviews for BMO between Jan. 24 and March 6.