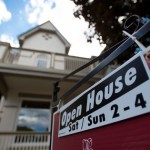 TORONTO — Canadian resale home prices rose in July and the pace of 12-month price appreciation accelerated, the Teranet-National Bank Composite House Price Index showed on Wednesday, adding to strong housing starts this summer to signal a market that continues to be robust. 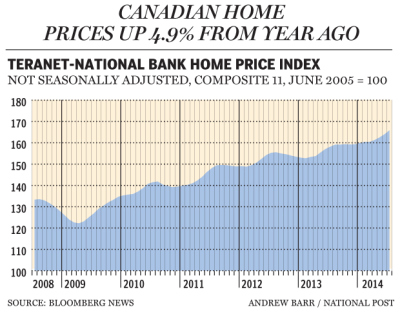 The price increases, on top of strong housing starts data released earlier this week, have surprised economists who have been calling for a slowdown in Canada’s long housing boom.

Canada escaped the U.S. housing crash that accompanied the 2008-09 financial crisis, and home prices have risen sharply, if not steadily, over the past five years despite moves by the federal government to tighten mortgage lending rules.

A separate report on Wednesday from Canada Mortgage and Housing Corp (CMHC), the federal housing agency, predicted a gradual slowing for the market as buyers mop up excess supply before builders start new projects.

“Recent trends have shown an increase in housing starts, which is broadly supported by demographic fundamentals,” CMHC Chief Economist Bob Dugan said in the report. “However, our latest forecast calls for starts to edge lower as builders are expected to reduce inventories instead of focusing on new construction.”

Prices were down 0.1% in Winnipeg.

Year-over-year price gains were seen in seven of the 11 cities surveyed.