TORONTO — Sales of existing homes in Canada slipped further in January as the drop in oil prices hurt homebuyer demand in western Canada, the Canadian Real Estate Association said on Tuesday, with one analyst saying seller panic has set in. 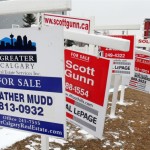 TD economists say prices are on track to fall as much as 10% in Calgary, Edmonton and St. John’s Newfoundland over 2015 and into 2016 as plunging oil prices turn the nation’s housing market upside-down. Read on The association, the industry group for Canadian real estate agents, said sales activity was down 3.1% last month from December, the third consecutive monthly decline.

The data suggested Canada’s prolonged housing boom may finally be ending after more than five years of rising sales that pushed home prices to record highs.

Canada escaped the U.S. housing crash due largely to more prudent lending standards, but the long boom and high consumer debt levels have raised fears of a U.S.-style collapse. Still, economists expect any corrections will be strictly on a regional basis.

“Canada’s housing market is cooling notably, largely because of the sudden deep chill in the previously hottest cities. However, there is still plenty of regional variation churning below the surface. We suspect that with borrowing costs still plumbing the depths and many provincial economies holding up, any housing correction will be a specific regional affair,” said BMO chief economist Douglas Porter.

Prices, which lag sales, remained 5.2% higher than a year earlier, according to CREA’s home price index.

Actual sales for January, not seasonally adjusted, were down 2.0% from the same month in 2014, the first year-over-year decline since April 2014.

Related Canada’s oil capitals are headed for their first major housing correction since 2008, TD warns The economist realtors love to hate: David Madani stands by 2011 prediction of Canadian housing ‘day of reckoning’ Edmonton housing sales down nearly 26% in January from a year ago Calgary’s housing market under pressure as new listings, inventory soar

A sharp and sustained drop in oil prices has sideswiped the economy in the resource-rich provinces of Alberta and Saskatchewan, where homeowners are trying to sell their houses before values drop further.

“What is interesting to note about the housing measures is that there is a clear sense of panic,” Mazen Issa, senior Canada macro strategist at TD Securities, said in a research note.

Issa said Alberta and Saskatchewan were the epicenter of housing-related weakness in January, with sales down 24% in Calgary, 10% in Edmonton, 7% in Regina and 18% in Saskatoon.

“While national new listings were up by a modest 0.7% in January (after a 1.3% increase in December), the regional breakdown reveals a rush of homeowners looking to obtain top dollar before their respective regional housing market nosedives on the price,” Issa said.

Calgary’s drop extended December declines that have made the last two months the worst for the city’s realtors since at least 1988.

Since November, home sales in the city have fallen 44%, according to Bloomberg calculations based on figures dating from 1988 provided CREA.

The national sales-to-new listings ratio dipped to 49.7% as the number of newly listed homes rose faster than sales. It’s the first time the measure dipped below 50% since December 2012, CREA noted. At the same time, months of inventory rose to 6.5 months, its highest since April 2013.

Gary MacLean, realtor with RE/MAX Real Estate Central in Calgary, said the housing downturn has taken place faster than any he has witnessed in his 28 years in the industry.

“It is, of course, linked directly with the speed at which oil crashed,” said MacLean. “There are layoffs happening everywhere which is taking buyers out of the market. If they have not lost their jobs, they are afraid they might lose theirs, so they have put on hold their buying plans.

“These layoffs or potential layoffs are also hitting homeowners with large mortgages, lines of credit and credit card debt,” he said. “I believe that a large percentage of the rush to market may be caused by this group of people trying to sell their homes.”

MacLean said many people know someone who has been laid off and that causes a ripple effect in the economy, resulting in consumers becoming very cautious about spending. This reduces the number of potential buyers in the marketplace.

“When we have a market like last year with a shortage of inventory for the number of buyers out there, prices are driven up,” he said. ” It is the law of supply and demand. Well, we have started this year with a huge number of homes on the market, up over 100% from this time last year — and with sales down 40%, the same law applies here only in the opposite direction.

“This is a market in which there are a few buyers compared to the number of homes for sale. Sellers have to be aware of this and that they have to price their home competitively.”

According to Mike Fotiou, associate broker at First Place Realty in Calgary, there were only 580 MLS sales in the city between February 1-14. That’s a 35.8% drop from the same period in 2014. Sales are also off by 35% from the 10-year average and by 25.7% from the five-year average.

Fotiou said the Calgary luxury market has also slowed significantly, with only 15 homes selling for $1 million or more, compared with 36 for the same period last year.

Overall, new listings have risen by more than 14% so far this month.

The national average price, not seasonally adjusted, for homes sold in January 2015 was up 3.1% from a year earlier to $401,143, the smallest year-over-year gain since April 2013. With files from Postmedia News