EOTTAWA — Sales of existing homes cooled in September as they fell 1.4% on a month-over-month basis, the first monthly decline since January, the Canadian Real Estate Association said Wednesday.

The association said sales through its Multiple Listings Service were down in about 60% of all local housing markets last month.

CREA president Beth Crosbie said affordably priced single family homes are in short supply in some of the hottest markets and that contributed to the monthly decline.

Related he $11 billion in mortgage payments the Bank of Canada doesn’t know about Even Canadian real estate companies don’t see much growth in home prices left While Toronto’s housing boom rolls on, some of the housing itself is falling apart “That said, there are other markets with ample supply, but sellers there are holding firm on price,” Crosbie said in a statement.

“There is a lot of variation in housing market trends depending on the type of housing, neighbourhood and price segment.”

Compared with a year ago, sales were up 10.6%. However CREA said September 2013 had five Sundays, considered to be the slowest day for home sales. 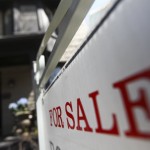 Excluding the Greater Vancouver and Greater Toronto markets, the average price was $325,406, up 4.5% from September 2013.

The aggregate composite MLS Home Price Index was up 5.28% compared with a year ago.

“Conditions get decidedly weaker anywhere east of Toronto, with no city reporting average prices up more than 3% year-over-year, and fully half below year-ago levels,” Kavcic wrote in a report.

“The good news is that the wide disparities in Canada’s housing market largely reflect economic, demographic and supply/demand fundamentals at work, all but eliminating any fears of a widespread ’bubble.”’

The number of newly listed homes fell by 1.6% in September compared with August.

CREA said the national sales-to-new listings ratio was 55.7% in September compared with 55.6% in August and within the 40 to 60% range usually described as a balanced market.

The association noted that just over half of all local markets posted a sales-to-new listings ratio in the balanced range.

There were 5.9 months of inventory nationally at the end of September 2014, up slightly from 5.8 months in August.

TD Bank senior economist Randall Bartlett said the lack of listings on the market continued to be a surprise.

“This suggests that home price growth may have more upside room over the next few months,” Bartlett said in a report.

“While the housing market continues to defy expectations in 2014, we still remain of the view that housing activity will eventually cool from current levels. With home prices continuing to rise above incomes, affordability will become an obstacle to housing demand once interest rates do eventually begin to rise.”

The increase came as prices rose in six of the 11 metropolitan markets surveyed including gains in Calgary, Vancouver, Toronto, Halifax, Winnipeg and Quebec City.

Prices were flat in Edmonton and down from the month before in Hamilton, Montreal, Ottawa-Gatineau and Victoria.