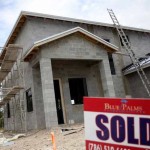 TORONTO — Canadian housing starts picked up more than expected in May and April was revised higher, suggesting housing will contribute to economic growth in the second quarter after a harsh winter put the brakes on construction, data released on Monday showed.

A report from the Canada Mortgage and Housing Corp showed the seasonally adjusted annualized rate of housing starts rose to 198,324 in May from an upwardly revised 196,687 units in April. That surpassed analysts’ expectations for a May reading of 185,000.

“Activity is picking back up to its pre-winter trend, another sign that it was the weather and not a fundamental slowdown that dampened Canadian growth in the last few months,” Bill Adams, senior international economist for PNC Financial Services Group, said in a statement.

“The trend so far in 2014 looks to be another year of activity more or less on par with 2013, and markedly lower than before the mid-2012 tightening of Canadian mortgage underwriting standards.”

While housing starts are within a healthy range now, a significant increase in months to come could catch the attention of Ottawa policymakers, said BMO economist Robert Kavcic.

“Canadian homebuilding activity has firmed up after a volatile winter. While current levels of starts are still within the range supported by fundamentals, a significant and sustained upward move from here could turn policymakers’ heads,” he said in a note Monday.

Canada’s housing market has risen unsteadily for the last five years and appears to be settling down for a soft landing, with housing starts slowing from red-hot 2012 levels in 2013 and maintaining the slower pace so far in 2014, on average.

The strong showing in April and May is likely a rebound from a weather-related slump in the winter, and took the two-month average 12.9 percent higher than the 175,000 recorded in the first three months of 2014, RBC economist Laura Cooper said in a research note.

“In the near-term, this rebound in residential investment is expected to lift overall GDP growth in the second quarter; however, with the weather-related volatility having likely now run its course, we anticipate that the pace of new home construction will cool once again over the second half of this year to levels similar to that averaged over the first half,” Cooper said.

The gains were fairly broad-based across the country, with starts in Quebec, British Columbia and the Atlantic region rising strongly, while Ontario was flat and the Prairies were lower.
© Thomson Reuters 2014