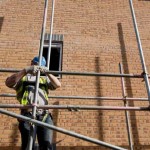 TORONTO — Canadian housing starts rose more than expected in February, data released on Monday showed, but the modest increase did not sway economists’ expectations that the country’s housing market will cool this year.

The seasonally adjusted annualized rate of housing starts rose to 192,094 units last month from a upwardly revised 180,481 in January, the Canada Mortgage and Housing Corp (CMHC) said. That topped expectations for an increase to 189,500.

Activity had decreased in January due to unusually harsh winter weather and the rebound in February suggested some of the weather-related impact was starting to wash out of the economic data.

The six-month moving average showed housing starts stood at 192,236 units. Since August 2013, the trend has remained in a range between 185,000 and 195,000, in line with CMHC’s outlook for a stable housing market this year, the report said.

A booming Canadian housing market in recent years prompted fears of a U.S.-style collapse, but Canada has so far avoided such a correction. The Canadian government intervened four times to tighten mortgage rules, which has helped rein in the market.

Most economists believe an increase in borrowing costs this year and an economy that is growing only modestly will lead to a softer but stable market in 2014.

“We remain of the view that construction activity will edge lower over the course of the year as the forecasted increase in interest rates should restrain demand,” said David Tulk, chief Canada macro strategist at TD Securities in Toronto.

“A smaller contribution from the housing market is consistent with the macro theme of domestic fatigue that will leave headline growth at or below its trend rate until net exports are able find their footing both in response to a weaker currency and a fundamentally stronger US economy.”

Activity increased in urban centers in Quebec and in the Atlantic region, was stable in Ontario, and decreased in the Prairie provinces and British Columbia.