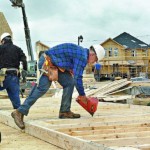 Boom times are over for Canada’s housing sector and the impact of “a more subdued trajectory” will be felt everywhere from construction and home renovation sites to retail stores, a Scotiabank Economics report predicts.

· Condo sales, prices up but rents starting to ease

Housing has generated a staggering $1.7 trillion in net new wealth for Canadians since 2000. A slowdown in house price gains — or even a possible slump in prices — “will reinforce a more cautious trend in consumer spending,” warns the Industry Trends report released Wednesday.

· Toronto home sales expected to be ‘brisk’ this summer

“We expect the sector will remain on a more subdued trajectory over the next several years, imposing a modest drag on output growth.”

Calling housing “a large and integral part of the Canadian economy,” Warren points to the following factors that emphasize how broad the impact could be.

· Residential investment, which includes new construction, renovations and the costs (from commissions to appraisals) of buying and selling real estate, added up to $128 billion in 2013 alone.

· That investment increased, on average, by 4.2 per cent between 2000 and 2012, almost double the GDP growth rate of 2.2 per cent, and accounts for almost 7 per cent of overall economic output, the highest among the G7 countries and double the rate of the U.S.

· Renovation spending, which totalled more than $47 billion in 2013, has reached record levels and become the fastest growing segment of real estate investment as more homeowners took advantage of their rising home values, low interest rates and government tax credits, to spruce up their nest rather than move to a new one.

· The total spent to create all those granite-clad kitchens and Euro-style bathrooms, and boost the value of Canada’s housing stock, grew by an average of 6 per cent between 2000 and 2012, notes Warren. That’s double the 3 per cent annual growth rate of new housing construction during the same period.

· There are many spillover benefits for secondary industries such as appliance manufacturers, suppliers of building materials, engineering services etc.

Housing remains a labour force giant, with 235,000 Canadians employed in residential construction in 2011 and another 245,000 in the real estate services sector alone.

But anyone doubting the impact of Canada’s decade-long housing boom just needs to consider one other number: Where Canadians are now worth $1.7 trillion more than they were back in 2000, the depressed housing market of the 1990s generated a relatively paltry $324 billion in new household wealth.

Warren likens the coming years for the housing market as ones of “less tailwind to more headwind” and expects to see resale activity edge lower in 2014/2015.

But population growth and a healthy labour market should keep sales levels close to 10-year norms. A softening of sales should slow price growth, with the greatest risk of an actual downturn in prices likely in the “more amply supplied high-rise segment than for single-family homes,” she notes.