The hundreds of thousands of Canadian snowbirds who flock to the United States are being hit by a falling loonie that should see their purchasing of U.S. winter homes start to slow, says a new report. 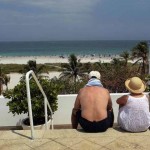 Here’s what $500K buys in Canada’s housing markets: A lake in Edmonton … a condo in Toronto

From four bedrooms in Windsor to one-bedroom in Vancouver, check out how far $500,000 goes in 8 major markets across Canada

It’s not going to be any sort of collapse, which is good news for Florida, the number one draw of Canadians where 3.5 million of us spend $4.4-billion annually.

“Make no mistake, the depreciation of the Canadian dollar will have an impact on Canadian stays in snowbird destinations such as Florida, but less than one might expect,” says Derek Burleton, deputy chief economist with Toronto-Dominion Bank, in a report.

Mr. Burleton’s real estate remarks are part of a broader report on the impact of a falling loonie on trips to the United States that are worth about $22.3-billion annually to the American economy based on 23.5 million Canadian visits.

For snowbirds looking to buy, TD says affordability has been impacted not just by the decline of the loonie against the greenback, but also increasing U.S. home prices.

Looking at just Florida, TD says the bottom of the market was reached in 2011 and there has been a steady increase in what it calls its Florida House Price Index. The index is up almost 50% over the past three years.

Much of the increase in Canadians buying in Florida — half a million Canadians own property in the Sunshine State — occurred over the past five years because of what TD calls a “60% cheapening” in property prices.

“No matter how you slice it, new purchase activity by Canadian in the U.S. looks set to slow markedly over the next few years,” writes Mr. Burleton.

In addition to a falling loonie and rising home prices, the cost of borrowing has climbed one percentage point in the U.S. over the past year based on 30-year mortgage rates.

Mr. Burleton emphasizes that the decision to seek a snowbird lifestyle is not going to drop dramatically, demographic trends guarantee that. But it could change people’s thought patterns on buying versus renting.

Existing homeowners might be inclined to ride out a downturn in the loonie because their U.S. homes are rising in values. Investors in U.S. real estate will have the upside of revenue coming in the increasingly stronger greenback.

But for the snowbird looking to buy right now, the game might have changed south of the border.