Canadians expect to be mortgage-free later than previously thought

A new survey says Canadians, on average, expect to be mortgage-free by age 58, one year later than in a similar poll a year ago. 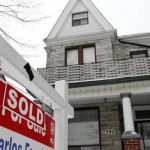 But the survey, conducted for CIBC by Angus Reid, found some big discrepancies across the country.

For example, homeowners in British Columbia thought they wouldn’t be able to pay off their mortgages until they hit 66, while those in Alberta expected to be mortgage-free more than a decade earlier at 55.

CARRICK TALKS MONEY Video: Carrick Talks Money: Why variable mortgages are the way to go this spring The survey also found that just over half of those polled were taking advantage of the current low interest rate environment to pay down their mortgages faster.

Fifty-five per cent said they were putting in extra effort into repaying their mortgages, although that was down from 68 per cent last year.

CIBC says even small efforts can lead to big savings for homeowners in the long run.

The bank pointed out that even making a lump sum payment every year – for instance, putting the average $1,600 tax refund towards the mortgage – would shave off $33,103 of interest.