Why more Canadians are turning to non-traditional lenders for mortgages 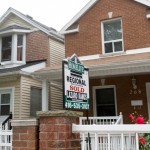 OTTAWA — Squeezed out by stricter bank regulations, a growing number of mortgage-hunting Canadians have been turning to non-traditional lenders to overcome borrowing hurdles like bad credit.

The proportion of mortgages given out by alternative institutions, other than banks or credit unions, remains small at roughly 2.2% of the entire market, said a recent analysis by CIBC.

But their share of the overall mortgage market has grown from 0.8% during the 2008-09 recession and is now expanding at a rate of about 25% per year, says Benjamin Tal, deputy chief economist of CIBC World Markets.

Tighter government regulations have opened things up for alternative lenders to fill an important void. They provide options for a range of potential borrowers, from people saddled with wobbly credit, to the recently divorced, to the self-employed who draw a smaller income from their business for tax purposes, says Jason Scott, a broker with the Mortgage Group in Edmonton.

“They play a niche role in the market,” Scott said.

Related If you don’t get the full Bank of Canada rate cut, what good is prime? Bank of Canada cuts key rate to 0.75% as oil plunge takes toll on economy He said, for example, these lenders can give someone whose credit kept them from qualifying for a bank mortgage the chance to rebuild their rating, although at a higher interest rate.

Scott said they can also fill a need for the recently self-employed who don’t have a long-enough income record for bank approval, or business owners who don’t take home a large enough salary.

He estimates about 10% of his clients acquire mortgages from alternative lenders, sometimes called “B-lenders” or “C-lenders.”

“There’s a growing segment of the population where it’s harder for them to get qualified with A-lenders,” he said.

“So, we need these alternative lenders to provide solutions while we’re getting them into a position where they can then go back and get the best rates.”

Gordon Hone, the president of Armada Mortgage Services, a small private lending firm in Maple Ridge, B.C., said his service is usually a short-term solution where his clients try to improve their credit ratings to eventually earn a lower rate, sometimes with a bank.

“That’s ultimately what we try to do — is help the client get back on their feet,” Hone said.

For those considering a mortgage through a non-traditional lender, Hone suggests would-be borrowers consult at least one experienced, reputable broker to find out more about the available options.

He said borrowers should also inform themselves as much as possible and, with increasingly heated competition in the private-lending market, Hone said it doesn’t hurt to shop around.

Elie Melki, a Montreal-area broker for Dominion Lending, recommends borrowers be vigilant and to always read the fine print.

Melki said he knows of people who were surprised with a 10% penalty because they hadn’t paid everything back after one year.

“You have to watch out who you deal with because some of them are not always honest,” said Melki, who added there are many companies with excellent services.

Last month, the Bank of Canada warned of the pitfalls associated with increased lending by less-regulated lenders to clients who are considered to have lower capacity to repay debt.

Tal said at just 2.2% of the market, non-traditional mortgage lending remains too small to pose a threat to economic stability.

However, he said it could become an concern if it were to climb to 5% of the market.

“We don’t want to kill this market because it’s a market that is part of a healthy system,” he said.

“We just have to make sure that it’s not being abused.” LATEST PERSONAL FINANCE VIDEOS