Low mortgage rates tempt, but penalties for breaking can be high 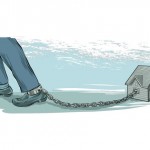 You want some of these record low rates on the market but you’re locked into a mortgage. Just break it, right?

Not so fast, there’s a key question you need to ask before you commit to break a mortgage: how much will it cost you? Actually, it’s a question you should be asking before you sign up in the first place.

Don Hurman, a 64-year-old from Okotoks, Alta., learned the hard way when he incurred a $10,000 penalty after selling his house halfway through a five-year mortgage term. Some mortgages let you port the loan to a new home but Mr. Hurman was forced to break his and pay what is called the interest rate differential.

5 questions to ask before breaking your mortgage

1. You need to know what the penalties will be before you even sign a mortgage. You may tell yourself you have no plans to break that mortgage, but surveys says 9% of Canadians refinance before the term is up.

2. Can I port that mortgage? Let’s say you have to sell your home, can that mortgage be transferred to the next property you buy?

3. Are you tied to that bank you signed your mortgage with forever? Some mortgages cannot be broken unless you sell your home.

5. How will the interest rate differential penalty be calculated? This may be the most important factor. If the bank uses the qualifying rate or posted rate to calculate any penalty, it will cost you a bundle.

He said even though his new mortgage was at a better rate, the penalty in the end was much higher than any savings.

“I involved the bank head office, the ombudsman, the government, all to no avail,” he says. “Always find out the penalty info should you sell before the term is up before you sign on the dotted line. I found out the hard way.”

Mr. Hurman, who now says he is a renter, laments he couldn’t even write off the charge against his taxable income

Breaking a mortgage is not a minor issue when you consider 9% of borrowers end up refinancing their mortgage before the term is up, according to the Canadian Association of Accredited Mortgage Professionals.

Laura Parsons, the Calgary area manager for mortgage specialists with Bank of Montreal, said the penalties are key.

“You really have to understand what they are,” said Ms. Parsons, who agrees that a lot of people do not. “There is a responsibility of clients to read their documents but also for the lawyers to explain all the terms and conditions.”

She chalks part of this up to people being so emotionally involved in the purchase of their home that they don’t read everything in their contract or even bother to ask questions.

Ms. Parsons says people have become so focused on getting the lowest rate, they are paying too little attention to the terms of the contract which may be onerous. BMO’s own advertised 2.99% rate on a five-year fixed rate closed mortgage, which has gained so much attention, has a key stipulation that you can’t get out of the mortgage unless you sell.

There’s no penalty at all when a mortgage is open but that’s why you pay a higher rate.

“When it’s open you have full capability of paying it off at any time. When it’s closed, you get a better rate but we call the shots as far as what you can and can’t do,” says Ms. Parsons.

The penalties on a closed variable rate mortgage are pretty simple — three months interest. It gets more complicated once you lock in a rate.

Lock in and the penalty is usual the greater of three months interest or what is called the interest rate differential. How that IRD is calculated is the real sticking point.

Sometimes the IRD is calculated over just the term of the mortgage and sometimes it is calculated based on amortization length which can be as long as 25 years. The IRD is intended to compensate the bank for interest it loses when you break your mortgage.

The IRD is supposed to represent the difference between the rate on your contract and the interest rate the bank could charge if it was re-lending the funds. That rate will be based on the term left on your contract. If you have a five-year mortgage and break after three years, a comparable two-year rate will be used.

A key issue that has emerged is whether the bank calculates the penalty based on the posted rate or not. Using the posted rate is going to jack up your penalty considerably.

Vince Gaetano, a principal at monstermortgage.ca, says the banks use the mortgage qualifying rate to calculate penalties. The qualifying rate is normally used for consumers to make sure they can afford a hike in rates. It’s based on the five-year posted rate of the major banks and published by the Bank of Canada.

Mr. Gaetano wrote to the former finance minister, Jim Flaherty, to complain about the practice which he says cost a client a $28,369.51 penalty on a $469,000 mortgage that was being broken.

He says the bank used the mortgage qualifying rate of 5.24% — it’s now 4.99% — on a five-year rate to calculate the penalty on a 3.99% mortgage that was being broken. Mr. Gaetano says the real rate in the marketplace was about 3.69% so his client should have been charged a penalty based on 30 basis point IRD which would have been $5,862.50.

“They’ve added a clause to the contracts,” said Mr. Gaetano, adding the discount you received when you signed the mortgage is also part of the discharge charge.

He says consumers feel like they are “grinding down” the lender to get a great rate but are oblivious to the potential penalty awaiting them.

Mr. Gaetano says almost all of the banks have started charging this way. “An interest rate differential should only be [the banks] getting stuck with a higher rate because today the rates are lower,” says the mortgage broker. “So in that case, you pay the differential.”

There are some things you can do to mitigate that charge. If you have prepayment privileges, you can max them out before you break. If you have a mortgage that says you can prepay 20% once a year, on say a $500,000 mortgage you might be able to bookend two payments of $100,000 at end and beginning of the year, if you have the cash.

Some lenders will let you take the penalty and add it to your new mortgage but then you’re paying interest on interest, which seems pretty excessive.

The worst part might be that some people say they want to break their mortgage without any concept of what the penalty will be and by then it’s too late.

“No they don’t tell you [what the charge will be],” said Mr. Gaetano, adding consumers renewing their contracts should be very careful because while this may not have all been spelled out in old contracts the new conditions certainly are.