The president of Canada Mortgage and Housing Corp. acknowledges there may be a “data gap” when it comes to the degree of foreign ownership in the marketplace, as debate swirls over whethe 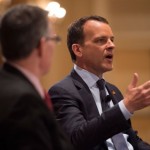 r overseas buyers are inflating house prices in markets like Vancouver and Toronto.

Tracking foreign buyers in Canada’s housing boom: Can we do it? Should we even care?

A third of people buying homes in Canada may be foreigners, says one real estate company. A leading economist says the number isn’t even 5%. The country’s housing agency says it has no idea what the actual number is In an interview Monday with the Financial Post, Evan Siddall said the research arm of CMHC is tackling the foreign ownership issue and looking for more data from the banks.

“We are looking at information that lenders have because lenders have clients,” said Mr. Siddall. “The problem is people buy through nominees and corporations and they are allowed to do that. We need to look for ways to pierce that. The way we do that with Canadians is we phone. We can’t phone people in Singapore or Hong Kong, we don’t know who to call. We need to try and look through to the extent we are legally allowed to do so and that we are not accessing privacy information.”

We don’t think the level of foreign ownership in Canadian housing markets is excessive The issue has become a hot topic with one Vancouver brokerage suggesting about one-third of single family homes in the city are going to people in with connections to mainland China. Prices for a single detached family home in Vancouver have topped $1.2-million while Toronto is closing in on $1-million for a detached home — levels that many people blame on speculative buyers from overseas.

Related CMHC continuing with plans for banks to take on more mortgage risk Joe Oliver says Canada won’t make major changes to CMHC, housing finance CMHC could force banks to pay deductibles on mortgage insurance Housing rush scrutinized by bank watchdog Mr. Siddall is sure to enrage that crowd, but he says while there may be more foreign ownership in some markets than others, he doesn’t think it’s a problem in general.

“Right now, based on what we know, based on information and analysis other people have done, we don’t think the level of foreign ownership in Canadian housing markets is excessive,” he said.

Mr. Siddall earlier told the Canadian Club in Toronto, in what was billed as a “conversation” with Terry Campbell, president of the Canadian Bankers Association, that his group decided to go ahead and release a study it had on the Vancouver and Toronto condominium markets even though it didn’t have any information on the foreign ownership in the sector.

“There’s no bogeyman in this, having foreign investment in the market, inherently there is nothing wrong with that. I owned real estate in the U.S. at one point and I’m not a bad guy,” said Mr. Siddall. “But we need to recognize the fact that when people don’t have direct connection to a country, when things go bad, they are more likely to take their cards off the table. If it gets too high, we become concerned.”

Tyler Anderson/National PostCMHC head Evan Siddall says while there may be more foreign ownership in some markets than others, he doesn’t think it’s a problem in general. In his conversation with Mr. Campbell, the CMHC head said his group continues to look at the idea of banks having some type of deductible, in case a consumer defaults on a loan.

“It’s kind of classic perspective,” he said. “It’s this idea of moral hazard that if you took risk away from the people who confronted it in the marketplace, it could lead to bad behaviour. The stupid example is if you insure someone who is driving a car, they won’t be a responsible car driver.”

Mr. Siddall agreed there was still a lot of discussion that would have to take place with the banks before any actual changes were made.

“In Canada, as you know and everybody in this audience knows, we did not have a housing crash like some other jurisdictions,” said Mr. Campbell, chalking that up to good risk management on behalf of banks when it comes it lending. “I think banks do have an awful lot of skin in the game if you look at the growth in their uninsured portfolio.”

As for who is driving the demand for change, Mr. Siddall left no doubt he answers to the minister of finance.

“Our responsibility is to give him and his department advice on this stuff. Rules changes like ‘skin in the game’ is for them to do,” said Mr. Siddall, who agrees with Finance Minister Joe Oliver that changes are more of a long-term project and cannot happen if it will destabilize the Canadian housing market. “He’s leading the