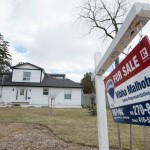 Buy a house with less than a 20% down payment and you have to get mortgage default insurance. There’s no choice. The rules are dictated by Ottawa and protect the banks, in the event you default.

Why the mortgage rate wars can rage more freely

Why did Bank of Montreal risk a (verbal) slap from Finance Minister Joe Oliver for daring to chop its five-year mortgage rate below 3%?

Because they knew the mortgage war is going to be different this time.
The rate you’ll be charged bears very little relation to your individual risk. You have a fantastic job, a great credit history and live in a part of the country where the housing market is on solid footing? Forget it, you’re paying the same premium as anyone else and it’s mostly based on your downpayment.

“The mortgage insurance product, irrespective of who sells it, is the same product. There is less product differentiation that there is among choices of 89 octane unleaded gasoline,” says Finn Poschmann, vice-president of research of the C.D. Howe Institute. “In gasoline, at least you can choose among ethanol content levels and detergents. Not so with mortgage insurance.”

Starting on May 1 consumers will pay even more for this insurance which provides a backstop to the entire Canadian economy given Ottawa is on the hook for close to the $1-trillion in mortgages it guarantees.

But this type of pricing could all change in the future. Evan Siddall, a former investment banker who was installed as president and chief executive of Canada Mortgage and Housing Corp. in December has been asked about the possibility of a risk-based method of assessing mortgage default insurance.

Sources say the new CEO has told people he doesn’t disagree with the principal of risk-based insurance.

CMHC wouldn’t offer any specific comment. “CMHC’s President has been consulting with a broad range of housing stakeholders across Canada over the past three months in order to gather information and perspectives on several different topics, including mortgage loan insurance,” a spokesperson, said in an email.

Related
Ottawa given ‘heads up’ before BMO mortgage rate cut, says monitoring market closely
Here’s why paying off your mortgage isn’t always the best idea
It would be a monumental change for the Crown corporation and might fit with the more business-like approach the department of finance seems to be demanding from CMHC. Former Finance Minister Jim Flaherty openly talked about privatizing the organization last year.

The new Finance Minister Joe Oliver doesn’t seem to be ruling out anything when it comes to the mortgage market these days. “The government is gradually reducing its involvement in the mortgage market,” he said, in response to the latest rate battle raging among the banks.

Last year, Mr. Flaherty put CMHC under the control of the Office of the Superintendent of Financial Institutions, to keep it more tightly under the thumb of finance.

CMHC has already begun overhauling its board with a more Bay St. flavour with the new chairman Robert Kelly, a former Wall Street CEO. One of the first major acts of new management was to increase the fees, something it said it needed to do to improve capital targets and reduce taxpayer exposure to the market.

With 5% down, the current cost of insurance is 2.75% of the value of your mortgage. That premium rises to 3.15% next month. CMHC controls a majority of the the market and its only two private competitors followed almost immediately with the exact same spike in rates.

Changing the model would be a potentially controversial measure that would leave mortgage insurance closer to the more traditional approach to insurance when it comes to assessing risk.

No one in the life insurance industry would ever give the same rate to a non-smoker as a smoker. Car insurers will charge someone in small town Ontario a much lower rate than say someone in Toronto.

It’s not without precedent. Australia no longer has mandatory government mortgage insurance but a market has developed for the product privately anyway, says Mr. Poschmann. In the United States, there are rates based on your state and within that state pricing you pay a premium based on your credit score.

It’s a one-size fits all model
“I think the Canadian model is partly [the way it is] because it’s historic,” says Mr. Macdonell. “We looked at this 10 years ago because finance was considering getting rid of the mandatory requirement for mortgage insurance.”

One of the biggest political problems for risk-adjusted based pricing in Canada would be the difference in pricing for people in rural areas versus urban areas. “It’s harder to sell a home in a rural area and that by itself would drive your price up,” he says, adding the current model makes Genworth’s portfolio stronger because it spreads risk more evenly.

The government has an interest in keeping that portfolio strong, given that in the event Genworth fails Ottawa is on the hook for 90% of the dollar value of the loans the private insurer guarantees for banks. The government backs 100% of loans insured by CMHC.

One of the reasons the banks are said to like the current system is they don’t want an increase in market share by private players because of that 10 percentage point gap. During the financial crisis in 2008, the banks started driving more business to CMHC because of that gap and concerns over credit. The banks want private insurers there for competition but only to a point.

The current system does mean some consumers are subsidizing others by paying a higher rate than they would in a free market. “In a reconfigured marketplace you would likely would have more variation. Credit scores would be one axis, so would the strength of the market and the ability to turn over properties. And the product itself could be different,” says Mr. Poschmann.

Vince Gaetano, a mortgage broker with monstermortgage.ca, says nothing illustrates the absurdity of the market more today than the fact that people with mortgage insurance and low down payments actually get cheaper rates than people with large down payments without insurance.

He can get a consumer with 5% down a mortgage rate of 2.84%, if they lock in that rate on a closed mortgage for five years. Put more than 20% down and the best he can do is 2.99% for the same mortgage because it has no government backing.

Still, he questions what the incentive will be to change the system — not because the banks like the current system but also due to the lack of data to access individual risk.

“Sure [changing the system] make sense. I just don’t think they’ll be able to trust the data,” says Mr. Gaetano, about assessing risk. “There are having a hard time trying to come up with a matrix to assess risk. It’s very difficult.”

For that reason, while many people think a change is coming from CMHC, it could take years to implement.