The head of Canada Mortgage and Housing Corp. said the Crown corporation is continuing with plans to have banks take on more risk when it comes to the housing market. 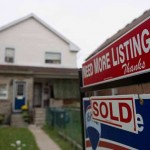 “In the insured market all of the risk is on CMHC’s balanced sheet or 90% on the government’s balanced sheet through private sector competitors. The government wants to reduce its exposure to the housing market,” Evan Siddall, president of Canada Mortgage and Housing Corp. told the Canadian Club in Toronto in what was billed as a “conversation” with Terry Campbell, president of the Canadian Bankers Association.

Mr. Siddall said the government has asked CMHC to look at options and advise it on what to do next.

Related Joe Oliver says Canada won’t make major changes to CMHC, housing finance CMHC could force banks to pay deductibles on mortgage insurance Canada’s housing market on course for soft landing, says CMHC Consumers with less than a 20% downpayment must get mortgage default insurance if they are borrowing from a bank regulated by the Bank Act. The government backs loans insured by CMHC 100% and for up to 90% for private entities like Canada Guaranty.

Mr. Siddall has said there is some value to banks having some “skin in the game” which some have suggested could mean banks pay a deductible of up to 10% in the event a consumer defaults.

“It’s kind of classic perspective,” said the CMHC head. “It’s this idea of moral hazard that if you took risk away from the people who confronted it in the marketplace, it could lead to bad behaviour. The stupid example is if you insure someone who is driving a car, they won’t be a responsible car driver.”

Mr. Siddall said the banks are responsible but the idea of deductible is “good idea” and something along those lines is good economic policy.

Sources have told The Financial Post that CMHC has already been in discussions with the CBA and Office of the Superintendent of Financial Institutions about the idea which is years away from being implemented.

Mr. Campbell told the audience a lot of conversation with the industry will be needed before anything happens.

“In Canada, as you know and everybody in this audience knows, we did not have a housing crash like some other jurisdictions,” said Mr. Campbell, chalking that up to good risk management on behalf of banks when it comes it lending. “I think banks do have an awful lot of skin in the game if you look at the growth in their uninsured portfolio.”

Jian Ghomeshi’s potential CBC lawsuit is hopeless — even if…

What to do with your savings: pay off your mortgage or diversify your investments?

‘Maximizing your mortgage payments is an investment, and I promise that it will be the safest investment you’ll ever make,’ says one expert 42 stocks that’ll thrive even if the economy gets worse

Sensors which can gather detailed information on heart rates, speed, workload and distance can be useful weapons in an athlete’s arsenal Big Dragons’ Den pitches, valuations from RosterBot and PÜR Gum — but only one lands a clear deal

With mutual understanding, research has shown, an initial clash in styles can actually lead to a wider range of skills for everyone involved