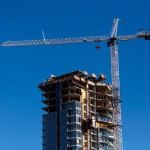 TORONTO — Canada federal housing agency lowered its forecast for housing starts but not prices in 2014 and said sales and construction will be flat or barely higher in 2015 as the once-roaring market adjusts to a glut of condominiums coming onto the market.

Canada Mortgage and Housing Corp said the nation’s housing boom is coming to an end in what officials hope will be a soft landing as construction slows to more sustainable levels and sales and prices tick only slowly higher.

Both forecasts represent a sharp slowdown from the 214,827 starts of 2012, when the market was at record highs and the government intervened to tighten mortgage lending rules.

“Builders are expected to continue to manage their starts activity in order to ensure that demand from buyers seeking new condominium units is first channeled toward unsold completed units or unsold units that are currently under construction,” Mathieu Laberge, deputy chief economist for CMHC, said in a statement.

Canada sidestepped the worst of the financial crisis of the last decade because it avoided the real estate excesses of its U.S. neighbor, and a post-recession housing boom helped it recover more quickly than its Group of Seven peers.

But the housing market began to cool in mid-2012 after the country’s Conservative government, worried about a potential property bubble, tightened mortgage rules. Demand fueled a strong rebound in 2013, and economists are largely predicting a softer but stable market this year.

The CMHC forecasts see homebuilding and sales leveling off, with prices continuing to notch small gains.

Price will continue to rise, and the agency even nudged up its forecast for price appreciation in 2014 given the strong start to the year, but said gains will slow in 2015.