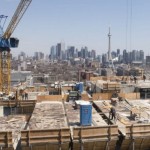 Federal housing agency trying to determine how much, and how often, parents are helping kids with down payments

Between 18,000 and 20,000 new condominium units are expected to be sold in 2014, says the Canadian Mortgage and Housing Corportation.

By: Susan Pigg Business Reporter, Published on Thu May 22 2014

Ontario’s housing market remains “modestly” overvalued, and that may be, at least in part, because of “gifting” — baby boomer parents who are helping finance down payments on pricey homes their grown children couldn’t otherwise afford, according to the Canada Mortgage and Housing Corporation.

That’s why the federal housing agency has launched a study, trying to determine how frequently young buyers are making purchases backed by the Bank of Mom and Dad.

CMHC is also trying to determine how much money is being handed down to echo boomers by their baby boomer parents, the wealthiest generation ever thanks to skyrocketing house prices and inheritances from their own parents.

“It may explain some of the gap between what’s fair market value and what people are paying,” especially in the Toronto market where bidding wars and fierce competition continue to drive up house prices, says Ted Tsiakopoulos, CMHC’s Ontario regional economist.

“It’s not data that’s readily available. It’s hard to get at, but it could explain a lot on the overvaluation front.”

CMHC has already compiled some preliminary data from Canada’s banks, which account for about 70 per cent of all mortgage lending.

Lenders are seeing a growing number of applications now accompanied by so-called “gift letters” worth tens or even hundreds of thousands of dollars from parents, outlining how much they are contributing toward the purchase in an effort to ease the monthly payments their grown children will have to carry.

“We’ve captured most of the variables we think are important. The missing piece is this wealth and gifting,” says Tsiakopoulos. “Industry people (lenders) have told us it’s happening. What we want to do now is quantify it in our (economic) models to help us understand this modest overvaluation, because we’re missing something.”

Statistics Canada data shows that between 1999 and 2012, Canadians’ net worth grew by 44.5 per cent, and the highest growth was among those over age 55, says Tsiakopoulos.

“That makes the wealth piece more important today versus 20 or 25 years ago.”

The data is critical, says CIBC deputy chief economist Benjamin Tal, because “it could be a market driver we’re not aware of.

“This transfer of wealth may be generating demand that otherwise wouldn’t be there.”

In a market like Toronto’s, where the supply of homes for sale continues to lag demand, it would also explain the bidding war mentality among young buyers armed with all the free money they need from their parents.

Tsiakopoulos mentioned the study Thursday while discussing CMHC’s spring outlook report for 2014 which found the GTA real estate market remains “resilient” and modestly overvalued, but no where near bubble territory or a major correction.

Sales of existing homes are likely to increase over the next two years but price growth ease, says the forecast.

Even the much-watched condo market is holding up well.

Rental is expected to be a major growth sector over the next few years, says Ed Heese, senior market analyst for the GTA.

That’s because echo boomers, who average 24 years old, now outnumber their baby boomer parents. Many are expected to remain renters for years to come. That should drive strong demand for rental condos, especially close to the downtown core, with another 10,000 or so likely to come up for rent this year as more units, many bought by investors, come to completion.

Rental rates, however, which have been growing strongly the last few years, are likely to ease, notes CMHC.