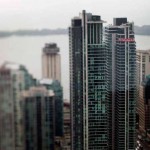 Canada’s housing agency is set to publish results of a Toronto and Vancouver condominium-owner survey as it seeks to address economist and policy maker concern that not enough is known about what’s driving price gains, documents show.

Canada Mortgage & Housing Corp. surveyed condo investors — those who purchased at least one condo that isn’t the owner’s primary residence — in August and September 2013, according to documents obtained by Bloomberg through an Access to Information request. Most of the content, including the number of people Ottawa-based CMHC contacted, the survey questions and the results, was redacted.

Calls are growing louder for more detail about who’s investing in the nation’s condo market, including how much is owned by foreigners, and what the risks are. Policy makers have warned for the past half decade a bubble may be forming in Canadian real estate, and some analysts have said prices are as much as 20% overvalued.

Related Sharp rebound in buyer confidence fuels Toronto condo recovery, says Urbanation Housing market skewed by handful of hot cities, Canada Guaranty CEO says Homebuilding rebounds quicker than expected with 35% jump in condos and apartments The lack of condo-ownership data in Canada “is a shortcoming,” Sal Guatieri, senior economist in Toronto for Bank of Montreal, said by phone July 22. “The more data, the better the quality of the data, the better the policy making.”

CMHC’s Condominium Owners Survey will be “factual and provides a descriptive profile of condominium investors,” the documents show. The agency expects to release the results of its survey, which doesn’t give an estimate of the share of foreign and corporate investors, in early August, according to a July 25 e-mail from spokesman Charles Sauriol.

National home sales reached the highest level in four years in June and prices in Toronto and Vancouver are up 12% and 29% on the year, a realtor report this month showed. Historically-low mortgage rates are adding momentum, and the Bank of Canada has kept its benchmark policy rate at 1% since 2010.

The survey to be released in August is CMHC’s second attempt. The agency conducted a telephone survey of Toronto and Vancouver condo investors in August 2012 in response to “industry concerns about the extent and nature of condominium investment and its sustainability,” according to a mostly- redacted August 2012 CMHC board presentation. The survey intended to determine what investors planned to do with their units, how long they intended to hold them, what would motivate them to sell, how much they put down and the source of the downpayment.

That survey wasn’t publicly released because it “didn’t produce results that were reliable enough,” CMHC’s Sauriol said in his July 25 e-mail.

The housing agency is monitoring foreign investment in real estate by tracking land registry data, hosting investor round tables and conducting surveys into vacancy rates and rents, according to the 2012 board presentation.

“There is no comprehensive data source of foreign investors in the Canadian housing market,” CMHC Interim Chief Executive Officer Douglas Stewart said in an Aug. 21, 2013 memo to Canada’s Employment Minister Jason Kenney. “Although some estimates can be gleaned from some municipal land registries, those estimates are not reliable.”

Stewart’s memo was in response to Kenney’s questions from a CMHC briefing about foreign investment in the Canadian housing market, the documents show. Kenney also asked about the impacts of changes to the Immigrant Investor Program in Vancouver and Australia’s foreign investment policy.

Participants at a Toronto condo investor roundtable that CMHC hosted in March 2012 cited unidentified brokers who estimated foreigners with no ties to Toronto account for about 2% to 3% of total condo purchases in the city, according to meeting minutes that don’t include participant names or affiliations. The minutes, included with the other documents obtained by Bloomberg, had already been made public.

Fifteen percent of the stock managed by rental management companies is owned by foreigners, based on filings of non-resident tax forms, according to the roundtable minutes.

Demand for Toronto condominiums pushed prices to new highs in the second quarter. The average price rose 2.8% from a year earlier to a record $554 per square foot, even as the number of high-rise homes in the pre-construction, under construction and occupancy phases reached a high of 105,027 units in the city, Urbanation Inc., a Toronto-based consulting company, reported July 25.

Condominiums account for more than 1.6 million Canadian households, or about 12%, and more than half of those are located in the three largest markets Toronto, Vancouver and Montreal, according to Statistics Canada data.

“The gap between the importance of the real-estate market to the economy and the lack of publicly available information on it is mind-boggling,” Benjamin Tal, deputy chief economist at Canadian Imperial Bank of Commerce, wrote in an April note to clients. “What is the share of foreign investors in the condominium market?”