No collapse in Canada’s condo market, but not much growth either – Consult with a Vancouver Mortgage Broker 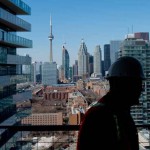 Leaving the city (and the big mortgage) behind

Many couples, stunned by the value of their homes in Canadian urban centers like Toronto, Calgary and Vancouver, are pondering trading city life for opportunities to cut costs in the suburbs or beyond. Read on

Genworth Canada and the Conference Board of Canada forecast prices rising in 2014 in all eight markets surveyed but barely ahead of inflation. Sales will also be positive but even the most robust market, Quebec City, will only see a 4% increase in resale condo activity.

“Although many commentators view the Canadian condominium market as an overvalued bubble about to burst, we think it is only slightly overheated and enjoys sound economic underpinnings,” said Robin Wiebe, senior economist at the Centre for Municipal Studies at The Conference Board of Canada, in the release. “As such, markets are likely to cool gently. To potential homebuyers, monthly mortgage payments, rather than house prices, are what matter and these should remain moderate.”

The report says all of the cities are expected to have employment and population growth in 2014. Those gains and continued low interest rates are cited as factors supporting the condo market, along with an aging population of empty nesters and cash-poor first-time buyers.

“With a variety of price points and central locations, condominiums remain an attractive and affordable option for those who want to be close to all that urban life has to offer, ” said Brian Hurley, chief executive of Genworth Canada, in the release. “For first-time buyers, well-maintained buildings with reasonable maintenance fees provide that balance between responsible debt investment and homeownership.”

Prices are forecast to pick up in 2015 but even the strongest market in Victoria will only see 4% price gains. Toronto is forecast to be the weakest market by 2015 with only a 1.7% price gain.

The report says there were price gains in six markets it surveyed in 2013 except Montreal, where condominium values dropped by 1.2%, and Ottawa which saw a 3.6% price decline.

For 2014, Calgary is expected to see the largest gains in price with the forecast for a 3.2% increase.
twitter.com/dustywallet