Condo choices not always an apples to apples comparison 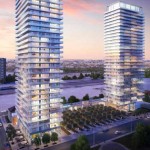 Will an apple a day keep the condo investor in play?

A Toronto developer trying to bring the concept of urban growing to Calgary thinks an apple orchard in the middle of two towers might be the next amenity condo buyers appreciate.

“I don’t think people will buy a condo to be next to an apple orchard but I think what happens on the ground is as important as what happens in the air. There is just not enough leisure space in any city,” says Brad Lamb, chief executive of Lamb Development Corp.

The one-acre apple orchard, which will include 66 apple trees, will be situated between two 31 storey towers between 12th Ave SE and 5th St. SE. in the oilpatch. Ground is expected to be broken in 18 months.

Mr. Lamb is going to set up the orchard to avoid condo board fights over who can pick and keep the apples. “We’re going to get a shepherd to manage the orchard and harvest the apples. A percentage will go towards the building and some could go to a market or be given to a shelter,” he says.

The developer commissioned a survey that found 93% of Canadians want more green space downtown, while 90% of Canadians support the idea of growing food in the city.

“The idea of bringing agricultural to the city is a revolutionary,” says Mr. Lamb, who admits it is more amenity than a plan for people to feed themselves off the land. ‘I don’t think you can do this on a level than eliminates the need for farms outside cities. I don’t expect hundreds of acres of apple orchards in any city.”

He’s open for other types of fruits and vegetables, but apple trees were chosen because it was felt they would grow well in the Calgary climate.

For now there will be a few limitations on what he’s willing to grow on a condo site. “Marijuana could be next but you’d have to legalize it first,” he said, with a laugh.