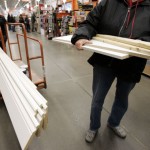 The never-ending strength of the Canadian housing market has homeowners switching to renovations at a record pace, according to a new report.

She says renovation spending has been the fastest growing segment of the market with real renovation outlays increasing at an annual rate of 6% from 2000-2012. This increase was double the 3% of new construction.

The spending on renovation has helped pushed housing prices because it increases the quality of the housing, said the report. That housing is eventually sold at a higher price.

Overall, Ms. Warren says the housing market may finally be turning. “Residential investment stalled last year, as affordability tempered home sales, and builders scaled back the number of new developments,” she said, adding Scotiabank expects a more “subdued trajectory” for housing over the next several years which will have a modest drag on the economy.

It has proven to be an important part of the economy with residential investment expanding at an annual rate of 4.2% from 2000-2012, almost double overall gross domestic product during the period. The sector contributed 0.3% annual to real GDP over the period.

The reports says a downturn, even if it’s just a softening market as opposed to a crash, will impact many industries.