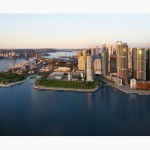 Fund which manages the retirement savings of 18 million people in every province except Quebec had its best performance since 2004 as private-equity returns surged.

The Canada Pension Plan Investment Board has invested in office towers being built in the Barangaroo area of Sydney, Australia. The development is typical of the private equity investment that lifted CPPIB’s returns to 17 per cent in fiscal 2014.

Assets rose 20 per cent to a record $219.1 billion from the same period last year and generated a record $30.1 billion in investment income for the year ended March 31, the Toronto-based fund manager said in a statement Friday. Private equities returned 30 per cent in Canada, 35 per cent in foreign developed markets and 37 per cent in emerging markets.

Canada Pension Chief Executive Officer Mark Wiseman said the gains were made even with “fairly priced” assets and challenges completing transactions in places such as India and China.

“My view is that in at least my career as an investor, this is probably the toughest market today to operate in as a value investor,” he told reporters.

The board’s 17 per cent return beat the 15 per cent median of Canadian pension funds in the 12 months ended March 31, according to RBC Investor Services.

Emerging markets fell to 5.7 per cent of its equity portfolio at the end of March from 6.7 per cent a year ago.

The fund, which manages the retirement savings of 18 million people in every province except Quebec, said it aims to continue to grow in foreign markets with 69 per cent of the fund invested internationally at the end of March, compared with 63 per cent last year.

This has forced Canada Pension to be “patient” and “pick its spots” in niche markets where the fund can leverage its long-term investment strategy to find value, like it did with the acquisition of Brazil’s Aliansce Shopping Centers SA, Wiseman said.