The luxury end of the Canadian housing market shows no signs of slowing down, at least according to one real estate company. 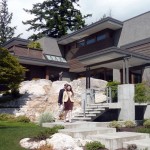 Re/Max surveyed 16 Canadian markets and found sales of what it calls “upper end homes” higher in 75% of those markets.

“Canada’s luxury housing market has undergone serious transformation in recent years, setting a new standard for the lifestyles of the rich and famous,” Gurinder Sandhu, executive vice-president and regional director of Re/Max Ontario-Atlantic Canada, said in a statement.

Re/Max says there is “upward trajectory” for home values in Vancouver but expects modest growth this year for prices.

In the oilpatch, a luxury home starts at $1-million. Sales of upper end homes in Calgary climbed 34% in 2013 from 2012. Edmonton is a little less pricey for a luxury home with the starting price $750,000 but sales jumped 32% over the same period.

Two cities that reported declines were Montreal and Ottawa. Quebec’s largest city saw a 7% drop in the sale of homes for $1-million or more from 2013 to 2012.