TORONTO — Home ownership became more affordable in Canada in the third quarter despite a broad spike in home prices, according to the latest survey by RBC Economics.

As housing costs rise, many first-time homebuyers are being priced out of the market and unable to save the huge down payment or even qualify for a mortgage. So more people are resorting to other ways to ach 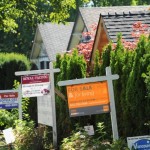 ieve their home-buying goals, including co-buying with friends or family. Keep reading. The bank says that was because of rising household incomes, low and steady interest rates and cheaper utility costs in many parts of the country.

RBC says resales rose for the eighth time in the past nine months in October, primarily due to robust activity in hot markets in Calgary, Toronto and Vancouver.

That is in contrast to balanced or soft conditions elsewhere in the country despite signs of strengthening activity in the third quarter.

RBC says this split resale picture shows up in price trends as well, with prices in Calgary, Toronto and Vancouver appreciating much faster than other local markets.

The report also suggests declines in fixed mortgage rates earlier this year were a key reason for such strength in the housing market since spring.

RBC predicts interest rates will slow the market in 2015 with the Bank of Canada expected to raise its overnight rate mid-year and longer-term rates will rise before that.

Related Forget city living: Canadian seniors are moving to the suburbs, study finds Great news coming if you’re renewing a mortgage, you’re about to save money “With home resales sitting close to the highest levels since early 2010, the overall tone of Canada’s housing market is quite solid at this stage,” said RBC chief economist and senior vice president Craig Wright.

“A combination of gradually increasing interest rates and higher prices will likely reverse the improvement in housing affordability that took place in the past year and weigh more and more heavily on homebuyer demand in Canada,” he said.

“We expect the next stage of the housing cycle to be a transition toward lower resales and slower price increases.”

The RBC index looks at the level of pre-tax household income needed to cover the costs of owning a specified category of home at current market values.