Deutsche Bank reveals 7 reasons why ‘Canada is in serious trouble,’ starting with a 63% overvalued housing market

Deutsche Bank’s chief international economist Torsten Sløk has circulated a chart deck looking at global housing markets, and Canada stands out as having quite a few problems.

According to the report, homes in Canada are 63 per cent overvalued, greater than the 50 per cent levels in Australia and Norway, Deutsche Bank AG said in a report Thursday. 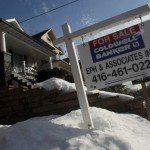 Related New American Homes Are Bigger Today Than They Were During The Housing Bubble Why We Should All Love The Suburbs The 25 Cheapest Housing Markets In America Sløk dedicated seven charts to the country.

Simply put, debt levels are very high, and with sky-high home prices cooling off, we could see pressure on the Canadian financial system and the labor markets.

While US households have been deleveraging since the Great Recession, Canadian household debt as a percent of household income is higher than ever:

The mortgage credit market has been slowing down, which is a bad sign for the housing market:

Other forms of debt have also been exploding, while income has grown at a much slower rate:

Construction of houses has been level over the last decade, while multifamily units like apartments have reached record highs:

Canada’s biggest housing market, Toronto, has been slowing down over the last couple years:

Any difficulty in the Canadian housing market could bleed over into the larger economy, since construction is a much larger part of Canadian employment than US employment: