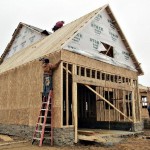 TORONTO — New homebuilding in Canada slowed slightly in November, coming in below economists’ expectations and suggesting some stabilization for the country’s robust housing market, data released on Monday showed.

The seasonally adjusted annualized rate of housing starts was 192,235 units last month from a downwardly revised 198,161 in October, the Canada Mortgage and Housing Corp said.

That was short of analysts’ expectations for 195,000. Housing starts in October were initially reported as 198,282. 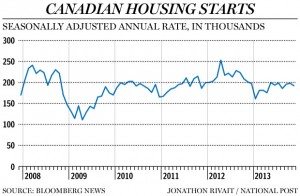 Still, the longer-term trend fared better, with the six-month moving average of seasonally adjusted starts dipping only slightly to 194,014 units from 195,274.

Canada’s housing market has shown resilience this year after a slowdown in the second half of 2012 when the federal government tightened mortgage rules due to concern consumers are taking on too much debt.

Policymakers have kept a close eye on the housing market, which boomed following the financial crisis due to record low borrowing costs. Some fear this could lead to a U.S.-style crash, though the Bank of Canada said last week it still expects a soft landing.

While starts are somewhat ahead of the amount needed to account for household formation at about 180,000, they are comfortably below levels seen during the pre-recession period, Kavcic said.

Many analysts expect mortgage rates, largely set off of bond yields, to push higher next year, which should also prevent the sector from becoming overheated.

“The momentum in the market does lay to rest any fears of a sharper retrenchment, but we expect that the gradual grind higher in yields in 2014 and beyond will drive a more sustained pullback in construction,” David Tulk, chief Canada macro strategist at TD Securities wrote in a note.

“Overall, housing starts have been following a trend similar to sales on the existing home market. As sales rise relative to listings of existing homes, buyers are increasingly meeting their needs in the new home market,” Mathieu Laberge, deputy chief economist at CMHC, said in a statement.

The seasonally adjusted annual rate of urban starts slowed in Ontario and the Atlantic provinces, while picking up in Quebec, the Prairies and British Columbia.