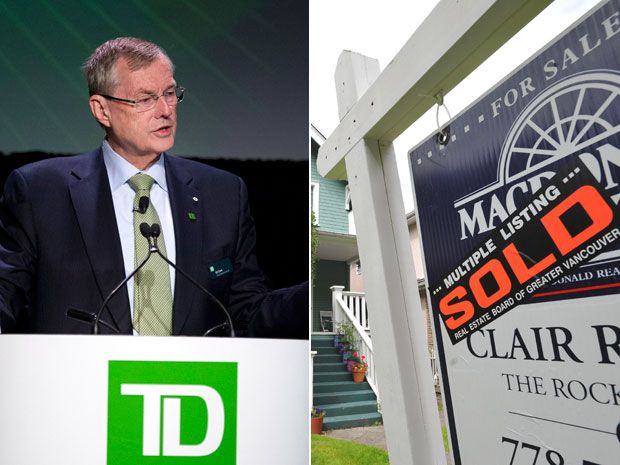 Crucial information needed to assess the health of our housing market is not available in Canada, and without it, players are flying blind, says CIBC economist

Mr. Clark said he is “supportive of” Mr. Oliver’s strategy — disclosed in comments to reporters last week — of letting the banks make their own decisions on how much to charge customers.

Economists and policymakers have been warning for the last several years about soaring household debt in Canada, especially when it comes to mortgages, by far the biggest chunk of that debt.

If the government is worried, “there are other ways” than dictating mortgage rates,  Mr. Clark said, referring to rule changes around things like the availability of Canada Mortgage and Housing Corp. default insurance and the kinds of loans that qualify for it.

“I think the focus has to be, are there other macro-prudencial things that you could do?” he said. “You know, [the government] changed the amortization rate, there’s lots of rules you could do that would slow down, take the pressure off the housing market but don’t change the price. I just think you come to the conclusion that governments fixing [mortgage rates] hasn’t been a success.”

This latest flare-up of the mortgage wars kicked off after Bank of Montreal announced late last month it was cutting its five-year mortgage rate to 2.99%, despite being reprimanded by then Finance Minister Jim Flaherty when it tried the same tactic last year.

Critics worry that the high personal debt levels have left the economy vulnerable and argue banks are partly to blame. For their part, the banks insist they are lending money only to customers who can afford to pay it back. And if they’re offering good rates, that’s because their own cost of funding is low as well.

There’s “healthy competition” among Canadian banks, Mr. Clark said. “You got a competitive industry so no one’s going to not match the other guy’s prices.”

Asked if he was concerned about the financial health of consumers, Bank of Montreal chief executive Bill Downe said earlier this week that his customers can meet their obligations. BMO is lowering its risk by focusing on “shorter amortizations,” in other words, loans that get paid down faster.

“I think the trick is to make sure that the underwriting standards are sufficiently conservative that the borrowers can pay the money back, and that’s really the issue,” he added.

Industry executives reject comparisons between Canada and the U.S. real estate meltdown that began in 2006, noting that standards in this country are much higher than they were south of the border, where players doled out tens of billions to people who were unable to make their payments when their mortgage rates jumped a few years later.

What happened in the U.S. was “colossal stupidity, but the regulator said it was okay,” so lenders just kept on lending, Mr. Clark said. In Canada, by contrast, there’s a different regulatory culture that focuses on principles rather than just meeting the requirements of complex rules.

The comments come the same day as Canadian Imperial Bank of Commerce economistBenjamin Tal warned there is a “mind-boggling” gap between the size and importance of Canada’s real estate market and the amount of good information about it.

Mr. Tal said in a report called “Flying Blind” that the lack of public data makes it difficult to judge whether Canada is experiencing a housing bubble.

A key unknown is the proportion of foreign buyers. Banks may know how many of their customers are from abroad, but they’re reluctant to share the information for competitive reasons.

Other missing data points include the distribution of home loans by credit score and the value of new mortgages in the most recent three-month period.