Canada’s housing market is showing signs of a soft landing amid evidence of robust demand and buoyant new construction plans.

Home prices in Toronto, Canada’s most-populous city, rose 5.4% in May from a year ago, the biggest increase in five months, the Toronto Real Estate Board reported Wednesday. Statistics Canada said the value of April municipal building permits posted a 10.5% gain. 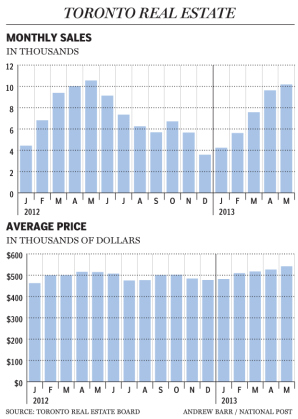 Housing-market data are showing few signs of a sharp correction even amid warnings from analysts and policy makers that a bubble may have been forming. Finance Minister Jim Flaherty tightened mortgage rules for a fourth time last year on concern that an overbuilding of condos could lead to sharp price declines. Former Bank of Canada Governor Mark Carney identified record household debt as the biggest domestic risk to the economy.

“The base case scenario is a soft landing,” said David Tulk, chief macro strategist at Toronto-Dominion Bank’s TD Securities in Toronto. “You’d have to see rates move dramatically higher” for a major correction, he said.

Driven by historically low interest rates, Canadian banks have been increasing dependence on real estate lending to drive earnings, with residential and non-residential mortgage assets totalling $955 billion at the end of March, or 26% of total assets, according to OSFI data. That’s up from $521 billion five years earlier, which represented 20% of assets at the time.

“A growing number of households who put their decision to purchase on hold as a result of stricter lending guidelines are starting to become active again in the ownership market,” Hannah said.

The decline in Toronto sales was led by condominiums and townhouses, while purchases of detached homes rose in May. Prices were up in all categories of homes.

“The story continues to be one of weaker volumes,” Derek Holt, vice-president of economics at Toronto-based Scotiabank, said in a note to investors. “The question is how that will carry over into construction and prices.”

Vancouver made one of the largest contributions to the national increase among 34 cities, Statistics Canada said, with permits rising 50.7% led by multifamily dwellings. Calgary permits also rose 40.6% to $773 million on commercial buildings.

Vancouver’s real estate board said Tuesday that home sales rose 1% in May from a year ago, with composite prices down 4.3%.

Falling home construction, which helped lift Canada’s economy out of recession, has been a drag on growth over the past year, shrinking at an annualized pace of 4.7% in the first quarter, according to GDP data released last week.