Not so fast kids, you may not get the family cottage – ask a Vancouver mortgage broker

Children hoping to inherit the family cottage may be in for a surprise, says a British Columbia financial institution. 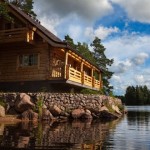 BlueShore Financial surveyed 498 of its clients between July 7 and 14 and found among those who own cottages 61% don’t plan on passing the property on to their children.

Chris Catliff, the president and chief executive of BlueShore, acknowledges the poll only considers B.C. residents and, of the total responses only 160 people own cottages. But he thinks there is an important message in his firm’s findings.

“When you mix family, money and cottage, it equals emotion. The biggest problem is there are a lot of assumptions,” says Mr. Catliff, noting there can be dangerous consequences.

His firm found that of those who own cottages, 47% listed ‘me or my spouse’ as owners, 16% had shared ownership with other family members, 14% had parents as owners and 23% reported other ownership situations.

The survey also found that 56% of cottage owners don’t have a plan for transferring ownership, while 54% have not discussed a plan with their children for what will happen to the cottage upon their death.

Related Fractional cottage ownership all the fun you can handle with much less work $7.4-million cottage shows Canada’s housing boom is feeding surge in vacation homes He said part of the problem with assumptions being made is that many parents will be forced to sell the cottages to help fund their retirement. “The kids just assume they are getting it, but parents need [the money],” he said.

Cottages represent a decent chunk of the net worth of Canadians, according to a survey released from Statistics Canada in February.

Based on 2012 data, the median net worth of families was $243,800. The main asset of most Canadians was their principal residence, which accounted for 33% of the total value of assets. But other property including cottages, timeshares, rental properties and commercial real estate, amounted to 9.9% of total assets held in 2012. StatsCan said about 20% of Canadian family units owned other property with the median value $180,000 in 2012. The median more than doubled since 1999.

“A lot of parents expecting to give property to their kids [don’t do so] because they see long-term affordability will be an issue for their kids,” said Mr. Catliff. “The long-term sense is this might be a luxury. Emotion is with the cottage but the reality is most people want to keep their city home first.”