Federal Budget 2015 holds off on new measures to cool housing

Household debt reached record levels in the last quarter, according to Statistics Canada, but Ottawa says our appetite for credit, driven by home ownership, has s 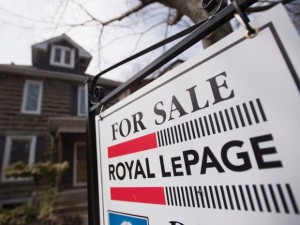 It appears that Finance Minister Joe Oliver has no plans to impose further restrictions on borrowing, with the budget noting Ottawa has tightened rules on government-backed insured mortgages four times since 2008.

The federal government says the overheated housing market is now a Toronto and Vancouver problem with the rest of the country having already witnessed moderation in pricing.

“There has been an appropriate and desirable moderation in housing activity in most regional markets across Canada. Toronto and Vancouver, in contrast, have continued to experience periods of strong sales and price growth, with housing market strength in these cities supported by such factors as population growth and land scarcity,” according to the budget.

Related Here’s what’s really scary about high-ratio mortgages in Canada Forget gold, buy a Vancouver condo if you want to stash your wealth, says world’s top money manager The federal budget states housing has been an “important” contributor to Canada’s gross domestic product but Ottawa doesn’t seem to think consumers are overstretched and noted the interest cost of servicing debt is at an all-time low.

“Higher debt loads leave the household sector more vulnerable to income shocks or a sudden sharp increase in interest rates,” according to the document. “However, as households have accumulated debt in a very low interest rate environment, the cost of servicing that debt is at a record low.”

The government says Canadians have been taking advantage of “solid employment gains” and record low interests to invest in all kinds of housing, including buying first homes, moving into larger homes or renovating existing homes.

“The pace of household debt accumulation relative to disposable income increased between 2002 and the depths of the global recession in mid-2009, before slowing and then broadly stabilizing at an elevated level since 2012,” states the budget document.

Household to disposable income was 163.6 per cent in the latest quarter but was under 110 per cent in 2002 before consumer borrowing began to take off. LATEST PERSONAL FINANCE VIDEOS