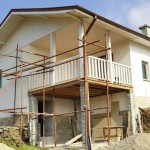 When Eileen Muzzin and her partner, Dan Pedersen, were searching for a home in Vancouver, they knew they wouldn’t be buying a place with granite countertops or a peekaboo view. With a modest budget – by Vancouver standards – they ultimately decided on a fixer-upper on the city’s east side.

The couple got a 2,000-square-foot home with walls painted red and gold, a weak electrical system, various objects buried in the backyard and a kitchen that was last renovated in 1961.

“We were digging in our yard and found a rolled-up carpet two feet down,” Ms. Muzzin recalls. “There were really old bricks there too, which we ended up reusing between our garden beds.

“We basically bought the crappiest house in the neighbourhood we wanted to live in,” Ms. Muzzin says.

“You can fix a home but you can’t fix a neighbourhood,” says Vancouver real estate agent Kel Parry.

What the home also had was good bones. The trick to purchasing a fixer-upper without ending up with buyer’s remorse is distinguishing between a home that has “potential” and one that could turn out to be a disaster.

To do that, a home inspection is a must. But that’s just the starting point, says Mr. Parry, who himself bought a fixer-upper with his wife many years ago in North Vancouver.

Hire a contractor to give you estimates on fixing problems. “If you can, get two or three quotes. Once you start getting those numbers down, tack on another 30 per cent for contingency,” he says.

“The first thing I tell clients when they’re considering a fixer-upper is, whatever you’ve budgeted, make sure you have more than that,” he adds. “There are always hidden costs.”

Aside from using savings, credit cards or lines of credit for HGTV-style projects, buyers can secure financing at the time of purchase through mortgages such as the CMHC Improvement program or Genworth’s Purchase Plus Improvements program.

Fixer-uppers typically need expensive renovations of kitchens and washrooms. Other common and costly jobs include repairing or replacing the roof and windows as well as upgrading the electrical and plumbing systems.

Some repairs are deal-breakers, with structural and foundation problems typically falling in that category.

“If you’re looking at a property that will continue to cost you money in the long run, and will cost you a lot of money right out of the gate, you want to get a professional opinion on that,” Mr. Parry says, adding that it’s important to do a property-information search with the city or municipality. “Structural and foundation issues are big.”

“Oil tanks are the ultimate deal-breaker,” says Mr. Munro, who claims to be the only inspector in the Greater Vancouver area who scans for buried tanks using a magnetic sensor. “The tank needs to be disposed of properly. You need to get an oil-tank-removal certificate, and then you need an independent soil-sample analysis.”

Aside from the environmental impact, cleanup can be costly. One North Vancouver homeowner had to spend $85,000 on the removal of a tank and the ensuing decontamination of her property in 2012.

Mr. Munro has found other buried treasure during home inspections. He discovered a Volkswagen Beetle in one backyard where the swimming pool used to be. In the fixer-upper he bought himself recently, a previous owner had deposited all of the old appliances under a few feet of dirt.

Then there’s the accompanying stress of renovations. They can take a toll on relationships as well.

“If you anticipate a number of projects, you have to be prepared to live in that situation with dust, with tarps, with all the things that come with living in a construction zone,” Mr. Parry says. “It’s very disruptive, especially if you have young children. If you can get renos started before you move in or even stay with relatives or in a hotel for a short period, those are worth considering. Some people don’t mind it, but it’s not for everyone.”

Mr. Munro says with a laugh: “I’m a marriage counsellor as much as a home inspector.”

For Ms. Muzzin and her partner, living amid the mess has so far been worth it. They enjoy working on their home and going to salvage lots for unique finds.

They installed a beautiful claw-foot tub with polished chrome feet in the main bathroom they renovated themselves. They hired professionals to replace the roof and upgrade the electrical system. Next up is that 1961 kitchen, with its linoleum floors and teal-coloured everything.

“I love having my own home to work on,” Ms. Muzzin says. “But it’s not for the faint-hearted.”