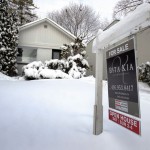 It’s only two weeks of data, but the Toronto Real Estate Board is reporting the first 14 days of February saw existing home prices continue to rise.

Safe as houses? Canadians think their homes will fund their retirement

The average sale price of an existing home reached $547,107 for the first weeks of February, that was a 7.8% increase from the same period a year earlier.

“Price growth well above the rate of inflation will be the norm for the remainder of the year. Over the same period, mortgage rates are expected to remain low, thereby keeping home ownership affordable in the Greater Toronto Area,” said Jason Mercer, senior manager of market analysis, in a release.

Mortgage rates have been trending back down for fixed rate products for five-year lengths, with some brokers suggesting the magical 3% barrier has been breached again.

There could be some upward pressure on prices from a pullback in new listings too. TREB said new listings over the same period are off 6.1%.

“The annual rate of decline was less than experienced last month,” said Dianne Usher, president of the board, talking about new listings. “This may point to an improvement in the listings situation moving forward, which would help alleviate some of the pent-up demand that currently exists in the marketplace.”

Sales have not pulled back either. There were 2,767 sales through the first 14 days in the GTA which is a 1.3% increase from a year earlier for the same period.

Detached prices are rising fastest. The average detached home sold for $710,949 during the period, a 10.4% increase from a year earlier. Semi-detached homes rose 2.1% in value, townhouses 8.8% and condominiums 5.3%
twitter.com/dustywallet