The company reported originations rose 28% to $2.6 billion in the third quarter from a year ago. So- called traditional mortgage originations, which have loan to value ratios of 80% or less, jumped 35% to $1.8 billion from the previous year. 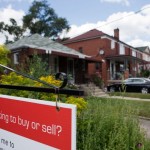 “We’re grabbing market share, some from the big banks,” Martin Reid, president of Toronto-based Home Capital, said by phone today. “Part of it is regulatory changes. Now people don’t qualify for insurance and banks may be less inclined to lend to them. The banks are just not set up for that type of underwriting.”

The banks are just not set up for that type of underwriting Home Capital is generating more business since the government began to tighten mortgage rules about five years ago and traditional lenders moved to lower risk exposure.

The Finance Department in 2012 reduced the maximum mortgage amortization period to 25 years from 30 years and cut the most homeowners can borrow against the value of their homes to 80%, among other changes. The Office of the Superintendent of Financial Institutions, Canada’s banking regulator, also introduced tougher standards for mortgage lenders.

Home Capital forecasts the trend will continue as the Bank of Canada and finance department seek to limit taxpayer exposure to a drop in home values through Canada Mortgage and Housing Corp., the nation’s government-owned mortgage insurer.

Related Toronto and Vancouver home prices pass Rome and close in on Paris Steady as she goes for Canadian housing market in 2015, says CMHC Any potential rule requiring banks to shoulder more risk or for CMHC to curb insurance would benefit Home Capital as the firm is able to tailor its lending for each loan, Reid said.

Home Capital third quarter net income rose to $73.8 million, up 11% from the same period last year. Profit excluding some items was $1.05 cents a share compared to the $1.06 cents a share estimate of 10 analysts surveyed by Bloomberg.