Home prices up, blame it on Toronto, Vancouver and Calgary

Three of the country’s most expensive housing markets continue to drive the national average price for a home, according to a new report.

You’re likely stuck in your current home because of new tougher mortgage regulations and ever-rising prices in the Canadian real estate market. Read on The Canadian Real Estate Associatio 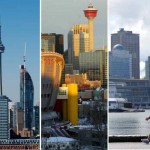 “Although activity rose in fewer than half of local housing markets in August, the national tally was fuelled by monthly increases in Greater Vancouver, Calgary and Greater Toronto,” the Ottawa based group said in a release.

The big three continue to see prices rise while their sales continue to increase, both factors helping to drive national numbers. Year-to-date, Vancouver sales are up 18% year over year while Toronto and Calgary are up 4.2% and 13.% respectively.

Related Canada housing market shows no sign of slowing as prices rise for 9th month: Teranet Foreign buyers are fuelling a seismic spike in Vancouver’s luxury housing market, realtors say Added together, the three cities are responsible for 33% of all sales in the country this year. However, the dollar value of the trades year-to-date have so far been worth about 48% of all activity.

“Sales picked up in some of Canada’s most active and expensive real estate markets which fuelled another national increase,” said Beth Crosbie, president of CREA, in the release. “Even so, the national increase in sales does not reflect local trends in many markets across the country.”

Prices were down in August from a year ago in six of the markets surveyed. Another eight markets were near the rate of inflation, in terms of price increases.

For August, national sales were up 1.8% from July and 2.1% from a year ago. It was the seventh consecutive month sales have grown and the highest level for sale since January, 2010.

“Sale activity in recent months has remained stronger than was anticipated earlier this year,” said Gregory Klump, chief economist with CREA, in a statement. “Listings and sales this spring were deferred due to unseasonably harsh weather which subsequently supported activity once the delayed spring home buying season got into gear. This trend was reinforced by a decline in mortgage interest rates.”

Mr. Klump said the boost from deferred sales will not continue and noted sales were down from the previous month in a majority of Canadian markets.

Supply continues to be constrained led by Toronto where new listed homes were down 1.2% in August from July. New listings were down from a month ago in about 60% of the markets surveyed by CREA.