ROBERT MCLISTER– Special to The Globe and Mail 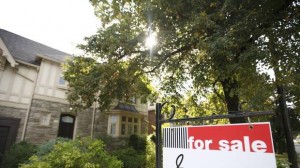 House for sale in a Toronto neighbourhood, August 27, 2013.
(Gloria Nieto/The Globe and Mail)

The idea that low mortgage rates are gone forever sent Canadian home shoppers into a panic this summer. Thousands rushed to use their rock-bottom pre-approved mortgage rates and buy a home, contributing to a20 to 50 per cent spike in sales last month in Canada’s biggest housing markets.

But how logical is rushing to buy a house simply because mortgage rates have risen?

For the past few months, consumers have been bombarded with comments like this:

“I think this is the real thing. This is the end of extremely low interest rates.” – Benjamin Tal, deputy chief economist at CIBC World Markets

Not surprisingly, many folks who read such comments head immediately to their bank or broker and lock in a rate for 90 or 120 days. Those 90-120 days fly by, which adds to their perceived urgency to buy.

But the reality is that by all historical measures, mortgage rates are still extraordinary and could remain so for a while. Take for example the most popular term, the five-year fixed, for example. Data from RateHub.ca shows that since 2006, the average discounted five-year mortgage has been 4.11 per cent. (See this attached chart for more details.) Since 1991 (the modern era of monetary policy), the average has been north of 6 per cent, reaching a high of more than 10 per cent in 1991.

Yet, even after this summer’s big bump in rates, it’s still possible to snare a five-year rate at 3.39 per cent or less. That’s just a short stroll from the historically low 2.99 per cent rates that garnered headlines for months.

And while the uptrend in rates may continue, there’s nothing to say they won’t reverse lower. We’ve seen three major fake outs in rates over the past five years and we remain in a low-inflation modest-growth environment. Until it’s clear that the Bank of Canada will start lifting its key lending rate, fixed mortgage rates will gyrate to the ups and downsof the bond markets and North American economy.

“Buying the same house will be more expensive this fall than this spring,” National Bank Financial’s Peter Routledge told the Globe and Mail last month. But analysts point to a range of factors that could moderate home prices in the next six months, including higher interest rates, growing supply, modest income growth and stricter mortgage regulations. Canada’s banking regulator is weighing new mortgage rulesas we speak.

Rates are the biggest wild card and the No. 1 factor that could put the brakes on home prices. Higher mortgage rates immediately make it harder for budget-strapped buyers to qualify for a mortgage. That’s why – other things being equal – as rates increase, prices usually decrease.

So if home prices potentially face headwinds, does it really make sense to run out, compete with a stampede of other buyers and purchase a home?

What are the chances that rushing to buy now will cost you at least $8,900 more and/or cause you to settle for a less than ideal property?

Knee-jerk decisions tend to be costly when it comes to personal finance, be it with investing, buying insurance, or getting a mortgage. If you’re in the market for a new home, get one or more 120-day pre-approvals to protect yourself from rate increases and reset them every few months as necessary.

Then take your time, block out the rate chatter, and wait for a property that’s the perfect long-term fit… and good value. Canadians live in their homes an average of five to 10 years. That’s a long time to live with a rushed decision.

On Thursday at noon (ET), Robert McLister will take your questions in a live online chat. To join the discussion, click here.

Robert McLister is the editor of CanadianMortgageTrends.com and a mortgage planner at VERICO intelliMortgage, a mortgage brokerage. You can also follow him on twitter at @CdnMortgageNews.